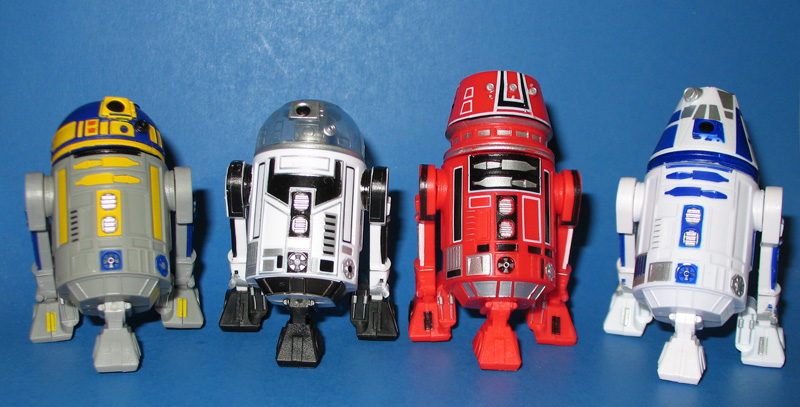 Over the weekend, to coincide with Star Wars Celebration Anaheim, Disney launched Series 2 of their popular Droid Factory build-a-droid attraction.  Disneyland stocked the new parts around the middle of last week while Disney World will be adding them soon.  The new parts have some updates to Series 1 and don’t appear to be using Hasbro molds, at least not for the legs.  The copyright info on the inside of the legs no longer mentions Hasbro, only Disney and LFL. There are no copyright markings visible on the heads, torsos or middle legs.

Sculpting detail on the torso for panels, grills and ports is very similar with just a few subtle differences that we were able to spot. The main difference is that the new torso does away with the second, bottom set of leg sockets so you can only plug two legs in at a time (not counting the middle leg). There are also changes to the top where the head plugs in. There is still a lot of detail but it doesn’t have as much depth to the wiring and greeblies.

We only had two similar domes from the Disney Droid Factory to compare, the R4 dome, and they’re very close to the same. There may be a slight change in the bottom rim of the dome and the only other thing we noticed is on the inside of the dome there’s a small connecting piece between the center assembly post and the wall of the dome. It’s probably there to give the center post more stability and make it less susceptible to breakage since it is longer than on the other domes. We also bought a new R5 dome and compared it to R5-G19. They’re very, very similar down to the internal structure that would be there to accept the antenna. The Disney droid does not have the antenna, and there’s no hole on the outside, but there is a peg hole on the top center for the hats.

The final major change is that there are no longer right and left legs, they’re interchangeable. The separate wires that connect from the front of the Hasbro legs to the inside are gone and the new Disney version only has sculpted detail. The center ring at the top of the legs has more crisp detail on the new Disney legs but is lacking some detail just outside of it.

All three legs have a wheel in the bottom and on most of mine, they roll better than the previous Droid Factory figures I compared them to. The new R5-G19 figure has decent wheels also so it’s not necessarily and improvement by Disney over what Hasbro has given us.

The color schemes we found in stock Sunday night included a new gray body with blue and yellow accents, a black R7 body and blue and red R2 bodies. There was also a body with black and gold on it.

There were similar, possibly the same, dome styles as we had in Series 1 and included R2, R3, R4, R5, R8 and R9. We don’t recall seeing R7 domes and nothing jumped out as being different than those listed.

New hats include a sombrero, Oswald ears and an Imperial cap in gray. Unfortunately, lost focus at the end of a long day caused us to forget to take a photograph of all the parts in the bins. Because of that we didn’t get a good list of all the new color combos but there was an interesting light blue and white R8 dome that we didn’t pick up along with one that had gold accents (and may have been the unaccounted for R7 dome and we’re just forgetting it). There was a new white R6 dome with red and black accents that we had originally assembled but swapped out at the last minute for the red R5 head that you see in the photos.

In general the paint applications feel like they’re lacking from Series 1. There are plenty of paint apps on several of the figures but the quality of the paint is what’s in question. Compared to the Series 1 droids we have, it’s a little more spotty. Although there were a lot of parts, there didn’t seem to be as wide of a variety of builds as in Series 1. We almost missed the R3 dome as it was buried under some other domes that seemed to be more plentiful. If we missed anything else it may have been because they were low on the part or we didn’t dig deep enough.

We liked the inclusion of the Imperial Officer cap and the Oswald ear hats are a nice change from the standard Mickey ears hat included previously. We only saw black Oswald hats so, unlike the Mickey ears from Series 1 which came in multiple colors, you only get black now. We don’t care for the Sombrero but picked one up to have one each of the new hats in stock.

We believe the price was $12.95 each but if you bought two droids they were priced at $21.95. There were no 2-pack bubbles that we saw, just singles, so the discount for two droids was made at the register. The backer card has been updated to the blue color seen in the photos. Instead of the star field background, the new cards have a blueprint feel to them with droid graphics subtly integrated. The text write-up on the back no longer mentions Star Tours but talks about how there are different droids and color schemes in the Star Wars universe. The font for the Droid Factory logo has been updated to what’s seen in the pictures. We were also handed four sticker sheets to name the droids and these appear to be the same as sold with Series 1.

It was unfortunate that we missed the Thursday Disney panel at Celebration since we don’t have additional info at this time about how many new parts are being made or what all the potential colors may be. Friend of the Holocron, Jace of OutlandCantina.com, did make the panel and we’ll have more details at a later date if he can fill in any of the info we missed.