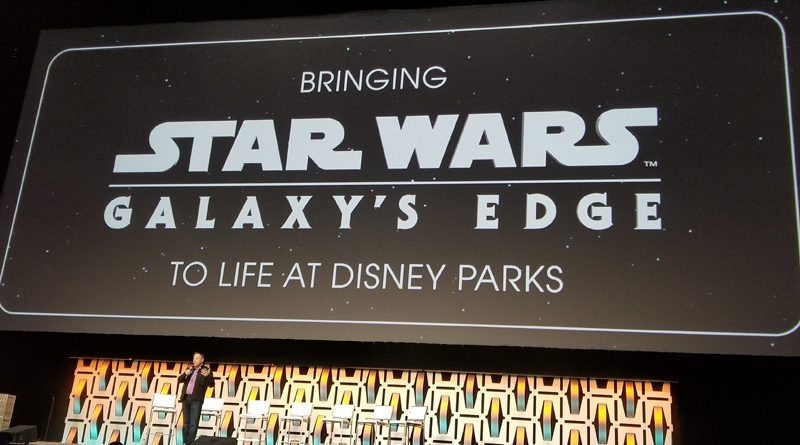 One of our most anticipated panels during Celebration was for Galaxy’s Edge, the new immersive world coming to Disney World and Disneyland parks later this year. Special thanks to our friends Mike and Dawn for letting us join them for the panel as we didn’t initially get picked in the panel lottery.

During the panel we were treated with a lot of concept artwork that was used to create the look and feel of Batuu, the planet that Galaxy’s Edge takes place on. It was decided that Batuu should be a new planet to the Star Wars universe so that the stories told there could be ours, the visitors to the park, rather than making it feel as though we were participating in the stories of characters we know from the Saga. The planet and the people that inhabit it will have backstories about how they came to be on the planet. Some of those stories will be told in books and comics which will be released in coming months. The first comic, “Galaxy’s Edge” #1 from Marvel comics launched last week on April 24th.

Galaxy’s Edge will be populated by new characters, including Dok-Ondar and Savi, who are proprietors of shops that you’ll be able to visit and buy merchandise from. As we noted in our Galaxy’s Edge Merchandise Demonstration article, visitors to Batuu will be able to build their own lightsabers or purchase holocrons, statues, and other toys and collectibles.

Familiar characters can also be found on Batuu with Rey, Poe, and BB-8 specifically mentioned. Captain Rex, former pilot of the Starspeeder from Star Tours, has been reimagined for Galaxy’s Edge and he’s now a DJ who will be playing new, but familiar, music in his new home on Batuu. Paul Reubens will again be providing his voice. Reubens isn’t the only actor reprising a role, Galaxy’s Edge will feature an incredible Hondo Ohnaka animatronic greeting visitors and he’s voiced by Jim Cummings who originated the character on Star Wars The Clone Wars. Frank Oz will appear as Yoda and, finally, Kipsang Rotich, the original voice of Nien Nunb in Star Wars: Return of the Jedi, is returning to voice Nien for his Galaxy’s Edge appearance.

Food will be a big part of Galaxy’s Edge and several options, including a cantina, will provide in-universe food and beverages to visitors. Coke will be a big partner for Disney had will have custom drink containers specially designed to fit into Star Wars, down to the fonts.

Two ride attractions will anchor the attraction, including being able to fly the Millennium Falcon. The set piece was built after studying shooting models of the ship and will be the definitive model of the Millennium Falcon. The ride itself will allow guests to pilot the ship and work with friends to navigate and do battle during the ride. The interior of the ship will reflect how guests did during their trip. If they had a rough ride, for example, the inside of the Falcon will appear damaged though the use of lighting and sound effects that may make it sound as if conduits are broken and wiring is sparking.

Because Galaxy’s Edge is about immersing guests in Star Wars, they’ve designed the attraction to be incredibly interactive. Guests will be able to install an app on their phone that will let them translate languages that appear on buildings or cargo crates around Batuu. You’ll be able to “hack” droids and see maps of the land all from your phone, all of which is geared to making you feel as if you’re in a galaxy far, far away.

The excitement surrounding Galaxy’s Edge was very high in the crowd during the panel. If Disney is able to pull off all of the plans for Galaxy’s Edge, and we see no reason they won’t, it’ll be one of the most incredible attractions at any of their parks. Galaxy’s Edge opens in Disneyland on May 31st and at Disney World on August 29th.

1 2 ►
Below is a recap of what we posted to Titter live during the panel and you can also read the original thread, with photos, at the following link: https://twitter.com/ImpHolocron/status/1117093646648606720