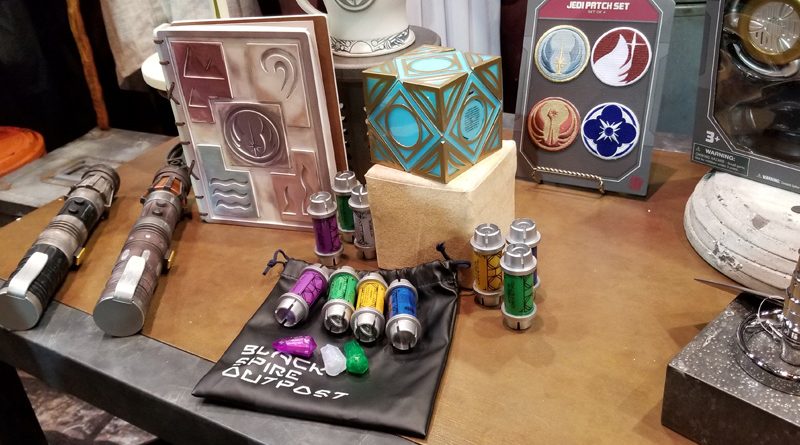 Disney had a large Galaxy’s Edge booth at Celebration where they had several photo ops and booths where visitors could record short videos about Star Wars and Disney. Those videos, we learned during the Galaxy’s Edge panel, will be recorded in a holocron and made part of the attraction.

The other draw to the display were the daily product demos of merchandise that will be available for purchase when Galaxy’s Edge opens. Because of other commitments and lines, we only made it into the product demos twice during Celebration.

The first demo we saw, on Friday, included toys such as small models of starships and pvc characters along with themed clothing and accessories from the Resistance Supply and First Order Cargo stores. Patches and pins, mugs, notebooks and other accessories were shown off as well.

Monday’s display featured higher end items from Dok-Ondar’s Den of Antiquities and Savi’s Workshop. Savi’s Workshop is where you’ll be able to build custom lightsabers that will have electronics and removable blades. Universal belt clips will be available to hold lightsabers whether they are built from the Original or Prequel trilogy eras. For display, universal stands will be available with each including acrylic attachments to hold lightsabers no matter what style or shape they are.

The amount of imagination and detail that’s going into Galaxy’s Edge is amazing and very exciting.