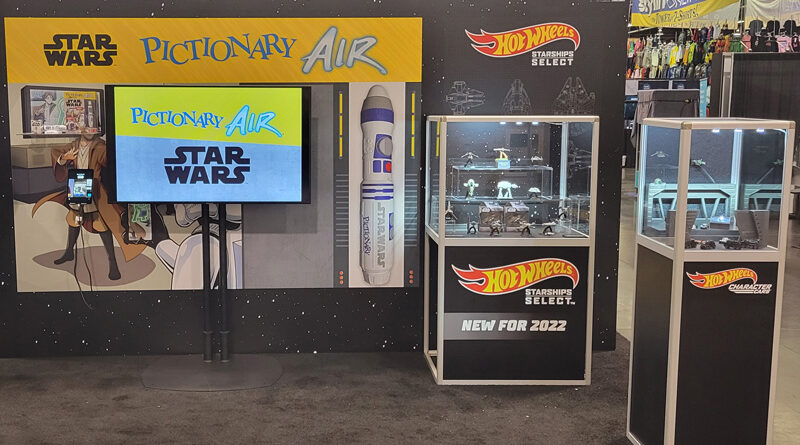 Just a few weeks prior to Celebration, Mattel launched a new line of Star Wars vehicles called Starships Select. The scale is a little larger than the starship line that’s been at retail for the past several years, and also comes with a larger price tag at $12.99. The sculpt and paint deco on the new line of ships is a step up from the previous releases, some ships will have moveable parts, and they also come with an upgraded stand.

The first wave of Starships Select includes the Razor Crest, X-Wing Fighter, TIE Fighter, and Boba Fett’s Starship. During Celebration, Mattel was selling a variant of the Razor Crest with a battle damaged paint deco. The packaging lists the ship as a variant and the series number and logos are called out in blue rather than red used on the main releases. The chase variants will be available at retail and the first case assortment, which includes five ships, has the Razor Crest doubled up. We can speculate that future waves with a ship listed as 2 per case will be the ship with the chase variant.

In addition to wave 1, Mattel was showing off several other upcoming ships; Imperial Shuttle, Advanced TIE, Millennium Falcon, AT-AT, Snowspeeder, Jedi Interceptor, and Republic Gunship. Revealed on Friday of Celebration was a Naboo N-1 Starfighter from The Mandalorian. If I understood correctly, the Shuttle, Advanced TIE, Falcon and Republic Gunship will be in the next wave. The N-1 Starfighter was specifically noted as coming in 2023.

We asked one of the Mattel reps if this new line meant the end of the $4-$5 line of ships and they said it was. Fans of the Character Cars, however, have some new releases to look forward to, including Fennec Shand and the Dark Trooper, which were also on display at Celebration.

Mattel was offering one show exclusive, a Darth Vader plush with light-up packaging.