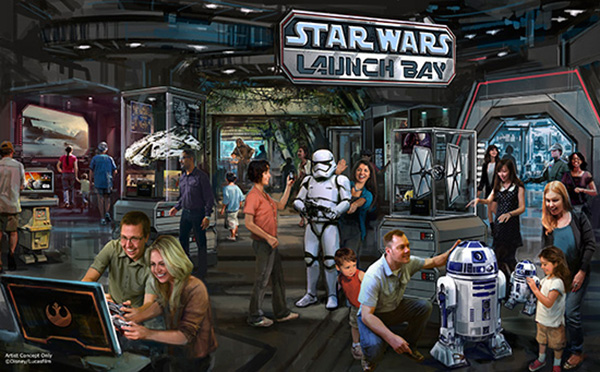 Disney held its D23 Expo this weekend in Anaheim and there were huge announcements for the future of the parks, including Star Wars expansions at both Disneyland and Disney World.

Starting later this year, both parks will add the Star Wars Launch Bay, a themed area that will feature characters, shopping and food. Star Tours will also be upgraded with new scenes from The Force Awakens.

The biggest announcement, however, are the Star Wars-themed lands opening at both Disneyland and Disney Hollywood Studios. The expansion at Disneyland will be 14 acres and the largest expansion ever. The size of the land at Hollywood Studios has yet to be announced, but the Star Wars land at both parks will feature new and familiar characters, food and shopping along with rides that include the opportunity to fly the Millennium Falcon. A date has yet to be set for the opening of the Star Wars lands but once report we read indicated that construction on one or both expansions could start later in 2017.

While the Star Wars expansions sound amazing, they’re not the only major upgrades coming to the Disney Parks. Toy Story Land will be inhabiting Hollywood Studios and Pandora – The World of Avatar will be a new land at Animal Kingdom.