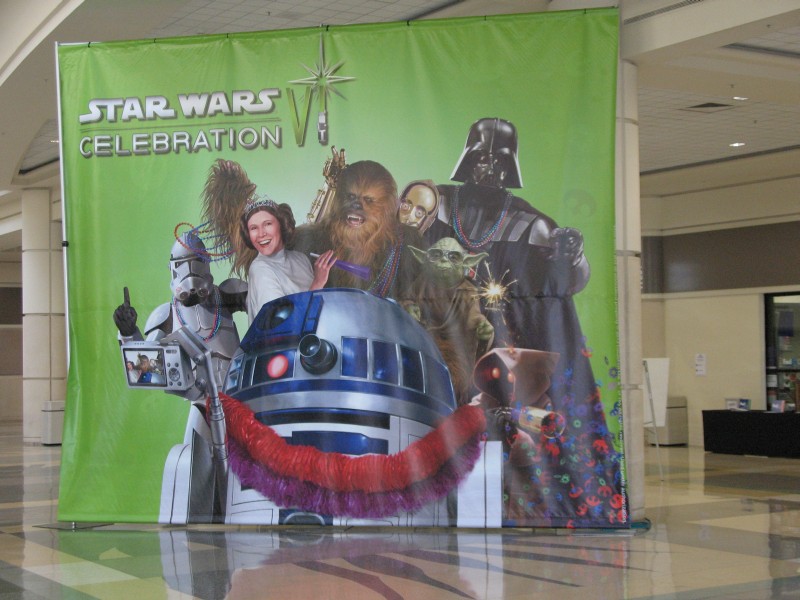 There were a lot of companies and sights to see at Celebration VI but not all of them need their own post so this is kind of a catchall for various booths and attractions.

Between the official Celebration banner, 501st Rancor and the Belgium dioramas, there were a lot of photo opportunities for everyone, whether they were in costume or not.

Acme Archives ran not only the Art Show but also had a booth selling their exclusive art. Several artists, including Dave Dorman and Jason Palmer, had their own booths and were in good company near The Art of Ralph McQuarrie.

Cartamundi gave away a set of Royal Flush cards and also sold framed sets along with “The Ace of Spaces Collection” which featured all the Ace of Spades cards from their playing card sets.

New to the Star Wars game, Camp Planner International had several styles of folding chairs along with an excellent Death Star bean bag chair in their booth.

Fans of plush collectibles didn’t have to limit themselves to the store for a basket of baby Ewoks, Comic Images brought a huge selection of their deformed characters along with several styles of their backpacks.

Galerie, who makes novelty candy collectibles, had a large booth where they showed off all types of mugs and candy dispensers that you should be able to find around the holidays at stores such as Target, Walmart and Toys R Us.

Mimoco brought a large selection of their USB flash drives while Super 7 showed off their Star Wars wallpaper and Nerdist Industries advertised their online video channel.

Schoolastic, Inc was just one of the publishers in attendance and at their booth you could see their innovative 3D pop-up books along with early reader books and guides to Lego sets and minifigures.

The Prop Store had a large display of pre-production artwork, costume pieces and props on display and for sale while Museum Replicas touted their line of high end costumes and accessories.

Disney brought the Carbon Freeze Me chamber to Celebration and there were long lines all weekend of fans looking to be “frozen” in Carbonite.  They also had a store section to their booth where they debuted a new series of action figures, sold an exclusive Vinylmation Princess Leia and offered other park exclusives.

Finally, the Tattoo Show was busy all weekend with the buzz of ink going on fans and the Autograph Hall attracted fans of all ages with the opportunity to meet their favorite actors and actresses from the Star Wars saga.