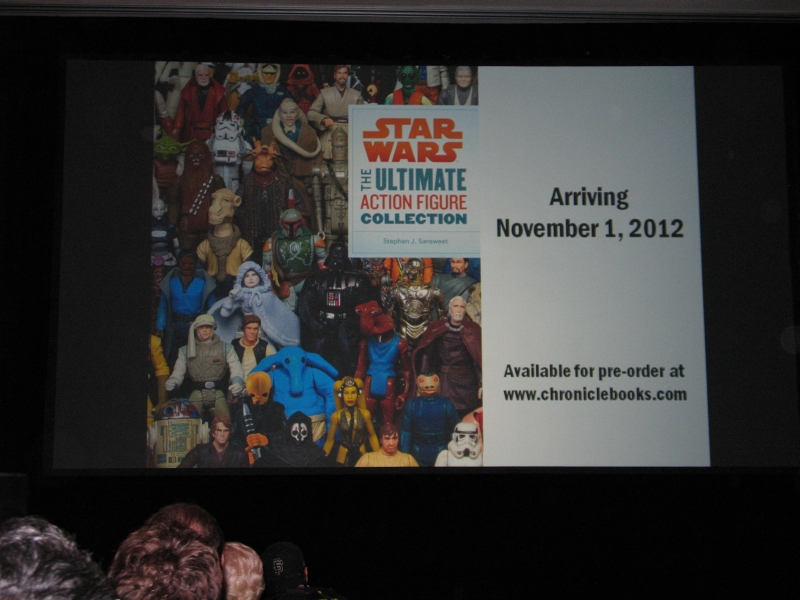 On Thursday afternoon at Celebration, Steve Sansweet hosted a panel on his upcoming book, “Star Wars: The Ultimate Action Figure Collection.”  With input from Dan Curto and Paul Harrison of Jedi Temple Archives, the book looks to track all the Kenner and Hasbro action figures from the Star Wars toy lines.

The 350 page book, which is due out November 1st, is arranged by character and includes all the major releases and variants that have come out over the years.  When setting out to put together the book, Steve worked with Dan and Paul to come up with an accurate count of how many figures have been released and they came up with approximately 2,300.  They discounted changes in accessories and unintentional paint variations and only counted intentional changes to previous releases and newly sculpted or kitbashed figures to arrive at that number.  They also discounted card releases as all of the figures in the book are loose.

Originally, Jabba the Hutt was not included in the book as he was thought of as a creature rather than a character.  Since he has a speaking role, Steve fought for his inclusion so he’s now in the book.  During the writing, they also discovered that Luke Skywalker has had the most unique releases of figures over the years.

The book covers the line of action figures from the original Kenner releases in 1978 through approximately June of this year.  Single carded releases, pack-in figures, multipacks, comic packs, basically every figural release were counted to make the book as comprehensive as possible.

Steve and his team talked about how compressed the timeline was for production of the book.  They started in the summer of 2010 and received the go ahead in December of 2011, but were only given 10 days to turn in a sample.  After that, their deadline was February 24, 2012 to have the draft turned in.  The amount of work in cataloging the figures, photographing them and writing the text is hard to get your head around.

Several sample pages were shown during the panel along with a look at some of the setups for the cover and photos that turned out to be used as filler inside the book.

If you are a fan of the Kenner and Hasbro lines of action figures, “Star Wars: The Ultimate Action Figure Collection” will be a must for your reference library.  The book is available for pre-order now from Amazon.com for only $25 (as of this writing) while the MSRP is $40.