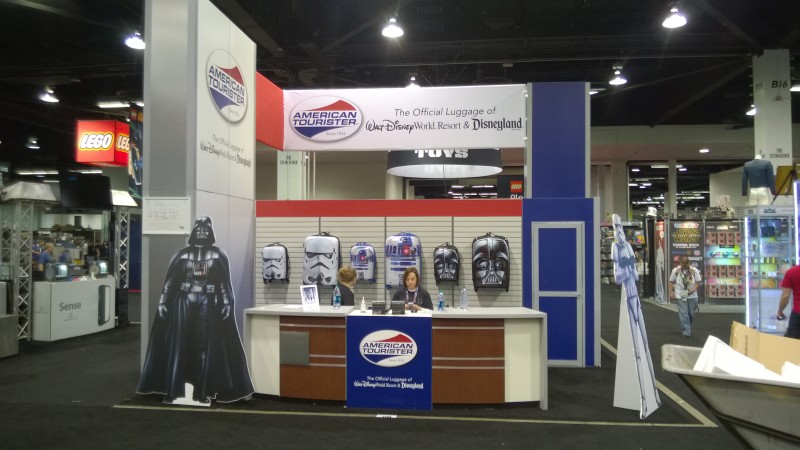 The final several booths that we wanted to cover had smaller a smaller presence on the convention floor at Celebration Anaheim, but were still very popular and quite busy.

American Tourister was selling their new Darth Vader, R2-D2 and Stormtrooper hard sided luggage.  R2-D2 seemed very popular and we saw quite a few rolling around the show floor, not to mention headed to the airport on Monday.

Cartamundi handed out their Lucky Sevens trading cards over the weekend and also debuted two new decks; Boba Fett and Rebels.  Both will be at retail soon and feature metal tin cases.  The Rebels set features characters and vehicles from the animated Disney XD show while the Boba Fett deck shows the popular bounty hunter is scenes from the films along with artist interpretations.

Comic Images, makers of several styles of plush characters and vehicles, had a large booth with multiple bins of their new and existing toys.  We didn’t take a picture on Sunday afternoon but their booth was extremely popular and was nearly wiped out.  They had a descent sized bin left of plush Bantha figures Sunday morning and two hours later, when we stopped back, they’d been cleared out along with the Tauntauns.

Galerie, who makes novelty items that are sold with candy during different holiday seasons, offered a couple exclusive mugs during the show and were quite busy every time we walked past.

Rubie’s Costumes, makers of consumer and holiday costumes, had new items in their shop including offerings for the ladies in the form of X-Wing Pilot and Boba Fett outfits featuring stylized graphics and skirts.

Finally, Underground Toys, who also makes several plush and novelty items, had a double-sided booths and emphasized their oversized plush characters such as Yoda and Chewbacca.

Along with Hasbro, Sideshow, Gentle Giant and Lego, the major license holders all had something new to see and buy at Celebration Anaheim.