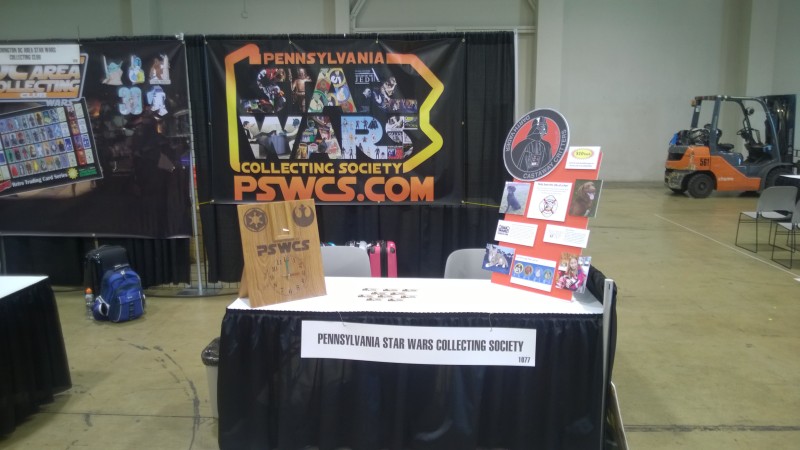 One of the things that makes Star Wars Celebration so much fun are the contributions from fan clubs and organizations such as the Pennsylvania Star Wars Collecting Society (PSWCS), 501st Legion, Rebel Legion and Mandalorian Mercs.

Local collecting clubs, such as PSWCS, have been a part of Celebration since the second event in Indianapolis in 2002.  Over the years they’ve offered games, done giveaways and raised money for charities.  The collector clubs also originated the multi-piece collectible patch sets that are so popular nowadays. There were other collectibles offered by the club members as well.  Members of the Ohio club came together to offer an ambitious multi-piece patch shaped like the classic Kenner Darth Vader case, and included the likenesses of action figures. It was a challenge to track down the 17 pieces but if you stopped in the Collectors’ Stage Social Room during the course of the weekend, it was possible. The Force United isn’t a club in the traditional sense but a group of popular collecting websites that have joined together to cover events and share booth space at Celebration.  The Force United includes Jedi Business, Jedi Temple Archives, Jedi News, Swfuk Podcast, The Star Wars Report and Yak Face.  Four of those sites, Jedi Business, Jedi News, Jedi Temple Archives and Yak Face also joined with SW Action News to put out a patch that featured their logos and the new droid, BB-8, from The Force Awakens.

We have a separate photo gallery of the 501st Legion booth but their members could be found trooping the entire show during the course of the weekend. Members of the bounty hunter club, Mandalorian Mercs, were also seen regularly on the hunt for the rouge Jedi and Rebel sympathizers from the Rebel Legion.

Possibly more so than any other convention, the fans at Star Wars Celebration contribute just as much to the enjoyment of the show as star guests that make appearances.