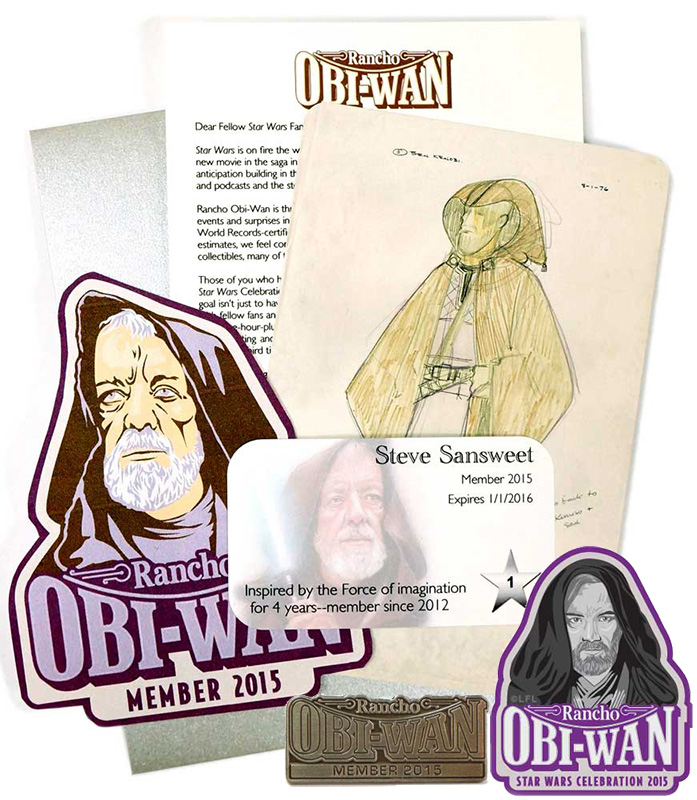 The Rancho Obi-Wan 2015 Membership Kit is in its final stages of production and will start shipping shortly to new members and current members as they renew.

This year’s patch and membership card art are based on a painting by the talented Daniel Bergren, which was done expressly for Rancho Obi-Wan for a fundraising auction.

In addition to the patch and hand-signed membership card, the kit contains a letter from Rancho chairman Steve Sansweet and the second in a series of costume designer John Mollo’s historic sketches that led to the final costume worn by Alec Guinness in Star Wars.

The Mollo sketch in this year’s kits is dated January 8, 1976, just a short time after Mollo had been hired. As the description on the back of the collectible card notes, the artist had changed the costume’s look from that of a more military-style outfit to a full length kimono-style robe with sash. The Japanese word for a kimono sash is obi. Mollo won an Academy Award for his work on the film.

In addition to the 2015 patch, as has become tradition Rancho will offer an exclusive Celebration Anaheim patch for sale to members only. The patch is based on a beautiful black and white pencil sketch of Obi-Wan by gifted artist Keven Reinke, also done specifically for a Rancho fundraiser. Both patches were designed by Curt Hanks. The Celebration patch will be included in the price of new membership kits purchased and personalized at Star Wars Celebration Anaheim April 16-19 at the Rancho Obi-Wan booth. They also will be available for sale to existing members. The Celebration patches are limited and will not be remade.

Become a member today (http://www.ranchoobiwan.org/support/memberships/) and receive the 2015 Membership kit as thank you gift for your donation. Renewing members will also receive the special silver pin. In addition to being able to order the Celebration exclusive patch (pre-order begins in March), members will be able to enter the Rancho Obi-Wan Experience booth through a special “lightspeed” entrance.