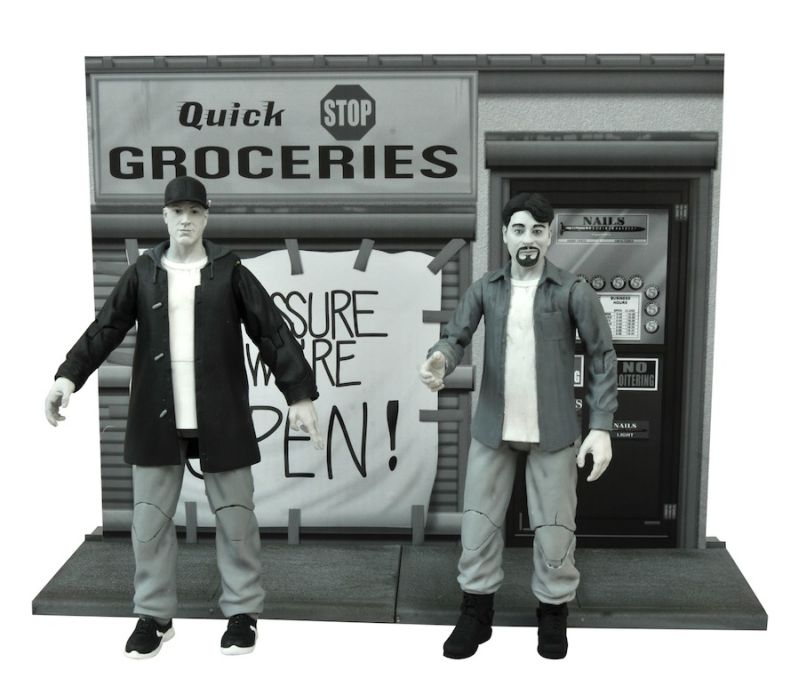 New York Toy Fair is over, and Diamond Select Toys is ready to start production on some of the brand-new items that were unveiled at the event! Nearly a dozen new items are in the new issue of Diamond Comic Distributors’ Previews catalog, including Godzilla, Supergirl, Shredder, Sabretooth and Rick Grimes, and you can place your pre-orders today through your local comic shop, your favorite online retailer, and the official DST website! Find your nearest comic shop at ComicShopLocator.com!

Photos below and full details after the jump.

Clerks Select 20th Anniversary Action Figures Series 1
A Diamond Select Toys release! They’re not even supposed to be here today! DST kicks off a line of action figures based on Kevin Smith’s classic film Clerks with Quick Stop employee Dante Hicks and perpetual loiterer Jay! Each 7-inch scale action figure is captured in the film’s famous black-and-white pallette, and includes film-accurate accessories as well as a diorama base that can be used to re-create the exterior and interior of the Quick Stop. Sculpted by Patrick Piggott, and packaged in oversized Select-style display packaging, with spine artwork.
Dante B&W Figure (Item #MAR152061, SRP: $24.99)
Jay B&W Figure (Item #MAR152062, SRP: $24.99)

Godzilla 1974 Figural Vinyl Bank
A Diamond Select Toys release! Watch out, MechaGodzilla! The newest full-figure bank in DST’s line of 12-inch vinyl kaiju is your old foe Godzilla, exactly as he appeared in 1974’s Godzilla vs. Mechagodzilla! And you know what happened in that movie! This 12-inch rendition of the King of All Monsters in his full 1970s glory features a coin slot on his back and a removable tail that reveals an updated and improved access door. Measuring 18 inches long from nose to tail, he is the perfect addition to any Godzilla collection! Sculpted by Gentle Giant. Packaged in a clear polybag. (Item #MAR152065, SRP: $34.99)

Marvel Minimates Series 63 Avengers Age of Ultron Wave 2 Asst.
A Diamond Select Toys release! The biggest movie of 2015 is slowly becoming the biggest Minimates assortment of the years, as well! With so many characters and looks to choose from, DST is offering a second, completely different assortment of 2-inch Minimates mini-figures based on Avengers: Age of Ultron! With three different two-packs, plus a rare, one-per-case variant two-pack, this assortment will complete your Age of Ultron collection with a vengeance! The line-up is still top-secret, but each Minimate features 14 points of articulation, as well as interchangeable parts and accessories. Packaged in a full-color window box! (Item #MAR152071, SRP: $9.99/ea.)

My Little Pony Pinkie Pie Vinyl Bank
A Diamond Select Toys release! The fun and energetic Pinkie-Pie is the next vinyl bank in DST’s line of banks based on My Little Pony: Friendship Is Magic! Perched atop an environmental base, the hyperactive Spirit of Laughter has a coin slot in her base for inserting coins, and an access door underneath to get them out again. Save up for a trip to Sugarcube Corner or to throw a party for your friends! Sculpted by Steve Varner Studios. Packaged in a clear polybag.(Item #MAR152064, SRP: $22.99)

Superman TAS Femme Fatales Supergirl PVC Statue
A Diamond Select Toys release! DST is finally entering the world of the DC Animated Universe! Their first release takes them all the way to Metropolis, the home of Superman: The Animated Series – and the adopted home of Superman’s “cousin” from Argo, Supergirl! Supergirl rests atop a rocky outcropping, ready to hurl herself at the next foe to threaten her friends, her city or her planet. Measuring approximately 9 inches tall atop her sculpted base, Supergirl comes packed in a full-color window box, and is in scale with other Femme Fatales PVC statues. Sculpted by Steve Varner Studios. (Item # MAR152063, SRP: $45.00))

Teenage Mutant Ninja Turtles Shredder Vinyl Bust Bank
A Diamond Select Toys release! The next vinyl bank based on the hit Teenage Mutant Ninja Turtles animated series is here, and it’s gonna give the Turtles some trouble! Oroku Saki, a.k.a. The Shredder, makes his vinyl bank debut, standing approximately 8 inches tall with a coin slot in the back, an access door in the base, and the detailed sculpting of a collectable bust! Where the Shredder goes, can the Foot Clan be far behind? Packaged in a clear polybag. (Item #MAR152068, SRP: $22.99)

Teenage Mutant Ninja Turtles Minimates First Appearance Box Set
A Diamond Select Toys release! With this box set, DST is taking the TMNT back where it all began! Based on the Turtles’ appearances in the original Mirage Comics issues that launched a worldwide phenomenon, this four-pack includes Leonardo, Donatello, Michelangelo and Raphael in their trademark red bandannas, each with their signature weapons. Each 2-inch Minimates mini-figure stands 2 inches tall with 14 points of articulation, and features interchangeable parts and accessories. Packaged on a full-color blister card. (Item #MAR152069, SRP: $19.99)

Universal Monsters Legacy Series 4 B&W Action Figures Box Set
A Diamond Select Toys Release! The Universal Monsters are back, with an all-new Legacy Series Box Set! Capturing three recent Universal Monsters Select action figures in glorious black-andwhite, this set brings together Quasimodo (from The Hunchback of Notre Dame), a Mole Person (from the Mole People) and a transforming figure of Dr. Jekyll and Mr. Hyde (from Abbottt and Costello Meet Dr. Jekyll and Mr. Hyde). The figures look like they just stepped off of the silver screen! Each 7-inch scale figure features 16 points of articulation and a small diorama base. Sculpted by Jean St. Jean! (Item #MAR152066, SRP: $50.00)

Walking Dead Rick Grimes B&W Vinyl Bust Bank
A Diamond Select Toys release! Keep your money safe from zombies (and the living) with the unyielding glare of Rick Grimes! Based on Robert Kirkman’s award-winning comic book, this 7-inch vinyl bust bank of Rick Grimes has been rendered in black-and-white, just as he appears in the pages of the comic! With a coin slot in the back and an access door in the base, he’s a bank as well as a collectible-quality bust! Packaged in a clear polybag. (Item #MAY138201, SRP: $22.99)