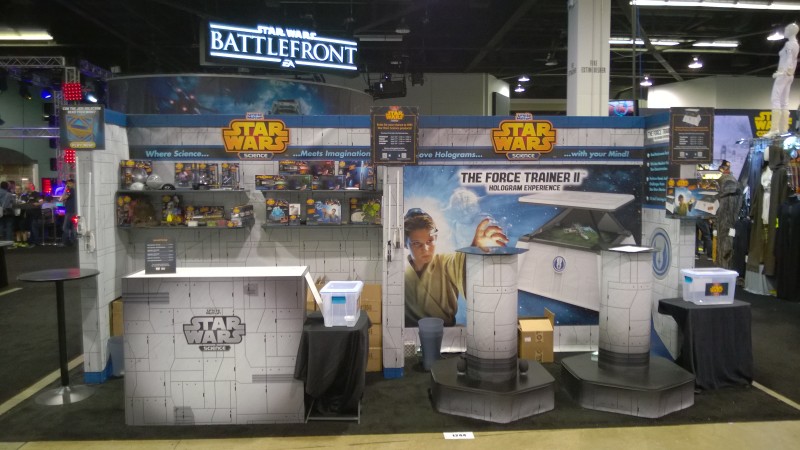 The Force Trainer II works with tablets to project holograms that you can interact with by concentrating.  A small headset fits on your head and has a sensor that rests on your forehead and a clip that attaches to your ear.  When you focus on the hologram in the Force Trainer II you can cause it to move.  Being demonstrated during Celebration, we had the chance to lift Luke Skywalker’s X-Wing fighter from the swamp on Dagobah.  You could also choose to Force-push some pesky Battle Droids.

There are other options for the Force Trainer and fans will be able to download upgrades in the future.  While it was being demonstrated with an iPad, it will be compatible with Android.  The Force Trainer II will be out later this year with an MSRP of $119.99.

The Jedi Holocron was also at the booth but it was a non-working model.  As mentioned in the pre-Celebration press release, Uncle Milton has partnered with 20Q to create the Holocron.  It will be able to “read” your mind and deduce what you are thinking by asking questions.  The Jedi Holocron will also be out later this year with an MSRP of $24.99.

A new Lightsaber Crystal growing set is on it’s way to market and this builds on a smaller set that was released previously.  The crystal will grow in a display that lights up and has different color options so you can go to the Light or Dark side of the Force.

Jedi Force Levitator is another new item.  It consists of a lightsaber wand and a foil ball that you can suspend in the air and interact with.

The final item being shown was the Millennium Falcon UV Light Laser.  The Falcon comes mounted on a light and sound emitting base and includes a glow-in-the-dark mat and photo transparency of a Star Wars scene.  By projecting the light through the transparency and onto the mat, you can create an image that will glow in the dark and can be hung on your wall.

We want to thank Hillary and Katie from Uncle Milton, they took the time to let us try the Force Trainer and speak about the new science toys coming later this year.