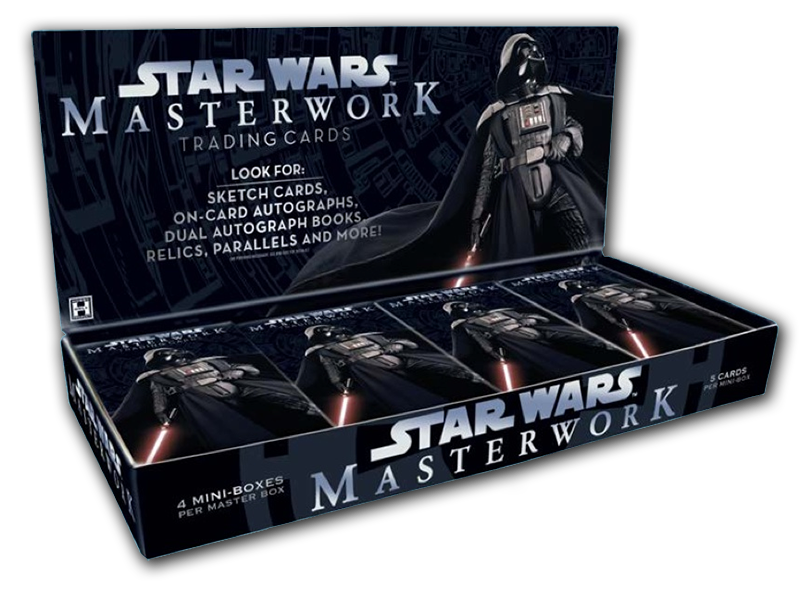 The Masterwork set will have 75 base cards with four parallel levels, three 10-card chase sets plus sketch cards, autographs and relic cards.  Each pack will contain 5 cards with one hit per pack and retail for approximately $50.  A box, as pictured above, will include four packs and is estimated to retail for $200.

Both Beckett.com and The Cardboard Connection have posted more details about this set, along with additional photos.  The Star Wars Masterwork set is due in December of this year.

If you thought that the Topps Star Wars Galactic Files or Chrome Perspectives sets were expensive or hard to track down, the Mastwork set looks to be the most challenging and expensive set.  If we understand correctly, each pack will contain a hit and one of the insert chases, meaning there will only be three base cards per pack.  If that holds, and barring doubles, it would take a minimum of six boxes plus a pack to assemble a base set and that would retail for about $1250.

It will be interesting to see who buys into this set and how it sells for Topps.  We know that the $500 printing plate sets for Galactic Files didn’t sell well and that some longtime card collectors passed on the recent Chrome Perspectives set based on pricing.  Although the $100 Return of the Jedi 3D set sold through in a couple of days, Legacy and Illustrated boxes were on the market for quite a while after launch.  Potomac Distribution, for example, still has Illustrated boxes (and both boxes and cases of Galactic Files 2) for sale and discounted Legacy earlier in the year.