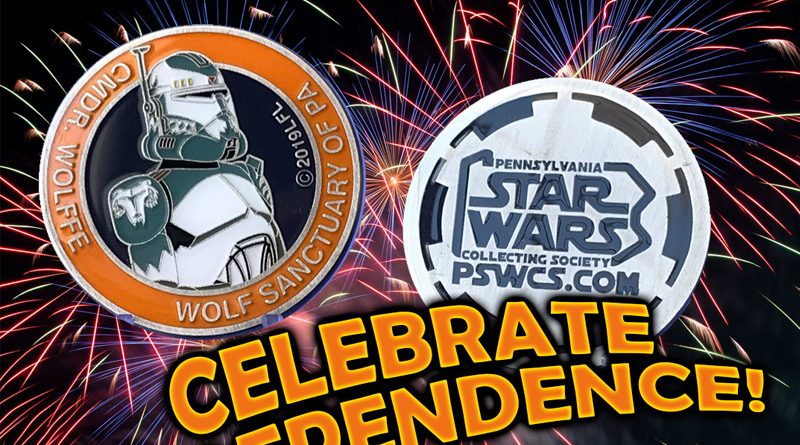 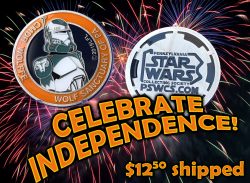 The Pennsylvania Star Wars Collecting Society and The Wolf Sanctuary of PA have teamed up to produce Commander Wolffe charity medallions, which debuted at Celebration Chicago. With fewer than 150 medallions left, your chance to join the Wolfpack is running out. Pick your medallion up today and make it the independent star of your collection. Happy Birthday ‘Merica!

Wolf Sanctuary of PA, based deep in Pennsylvania Dutch country, is a 501(c)(3) non-profit organization that provides food, shelter, and veterinary care for over 40 wolves and wolf dogs, with no government or corporate assistance.

The limited-edition medallion is fully approved by Lucasfilm and has an edition size of 1000 pieces. Each medallion features the likeness of Clone Commander Wolffe on the front, along with the date and the name of the charity, Wolf Sanctuary of PA. The back features the PSWCS logo.

You can place your orders now at pswcs.com/charity.cfm

PSWCS..org was founded in 2013 and received IRS status as a registered 501(c)(3) non-profit organization in November 2014. The goal ofPSWCS.org is to raise monetary donations to help charitable organizations in Pennsylvania and surrounding states. More information can be found on the web at www.pswcs.org.

About Wolf Sanctuary of PA

The Wolf Sanctuary of PA is a South Eastern Pennsylvania based 501(c)(3) non-profit charitable organization founded over 30 years ago.Originally created as a private rescue, Wolf Sanctuary of PA has grown into an educational facility. At the Wolf Sanctuary of PA, wolves and wolf dogs are given back their dignity. They offer refuge to wolves who have found themselves without a place in the natural world. They are devoted to assuring the most comfortable and stimulating environments for their wolves. The Wolf Sanctuary of PA currently provides food, shelter and veterinary care for over forty wolves with no government or corporate assistance.