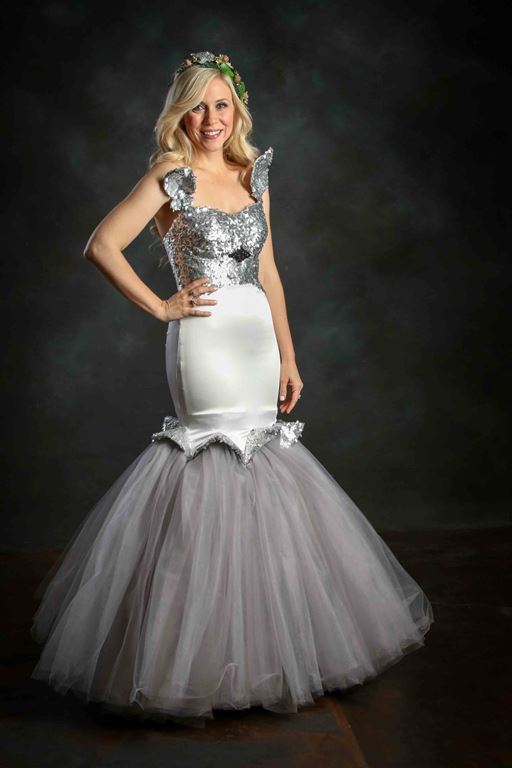 “GEEK COUTURE” IS THE HIT OF SAN DIEGO COMIC-CON

AS TWO WINNERS ARE CHOSEN IN THURSDAY NIGHT’S

July 25th – FOR IMMEDIATE RELEASE – The first-ever The Her Universe Fashion Show, at San Diego Comic-Con, sponsored by Her Universe, Hot Topic and Nerdist Industries, debuted last night to a packed house and great success with 36 stunning “Geek Couture” designs hitting the runway at the Grand Hyatt Hotel Harbor Ballroom. Only two designers could ultimately win the grand prize – the opportunity to design a fashion collection with Her Universe Founder Ashley Eckstein for specialty retailer, Hot Topic. The panel of celebrity judges chose Amy Beth Christenson for her design “Great Skirt, Marty” based on Back to the Future while the audience picked Andrew MacLaine for his design Regina’s Curse based on Once Upon a Time. The designers’ fashions embraced everything that is celebrated at Comic-Con – from sci-fi films and TV to comics, gaming, fantasy and more and it was tough to only pick two winners.

“Geek Couture has officially invaded San Diego Comic Con! Last night was truly a celebration of the Fangirl culture and geek fashion,” said actress, Her Universe Founder and Fashion Show Host, Ashley Eckstein. “The feeling in the room was absolutely electric! All of the designs blew me away!”

During the fashion show, Ashley Eckstein made a surprise announcement regarding a new collaboration with legendary Japanese animation company, Studio Ghibli, for an exclusive line of Her Universe fangirl merchandise to be sold exclusively at Hot Topic. This marks the first time Studio Ghibli has licensed a company to create apparel and gift items in the U.S. for such beloved Hayao Miyazaki films as My Neighbor Totoro, Spirited Away and Kiki’s Delivery Service. To honor this announcement, Eckstein wore a Totoro inspired geek couture gown designed and made by Catherine Elhoffer of Elhoffer Design.

About Her Universe
Her Universe was launched in 2010 by actress and entrepreneur Ashley Eckstein and The Araca Group, a leading theatrical production and brand management company. Ashley and Araca created Her Universe to address the expanding market of female sci-fi and fantasy fans.  We entered our first agreement with Lucas Licensing to develop and produce a line of female-centered Star Wars apparel and accessories. The success of that line was followed up with a collection for BBC America for Doctor Who, and CBS Consumer Products for Star Trek and AMC for The Walking Dead, Nerdist Industries, Marvel and Hasbro for Transformers. You can learn more about Her Universe and purchase the current line of fangirl apparel and accessories by going to  www.heruniverse.com and by following Eckstein & Her Universe on Facebook (facebook.com/HerUniverse) and Twitter (twitter.com/HerUniverse).

About Nerdist Industries
Nerdist Industries is a multi-platform creator of genre and popular culture content. Founded by CEO Chris Hardwick, its online presence includes a website at Nerdist.com; a premium YouTube channel (youtube.com/nerdist) featuring Nerdist News hosted by Jessica Chobot; a combined 2.4 million Twitter followers; a Podcast Network including the flagship Nerdist Podcast; The Nerdist School comedy training program; and the Nerdist Alliance, a community of curated partnerships with some of YouTube’s most talented and passionate creators creators including up and coming stars Hannah and Hilly Hindi of The Hillywood Show. Nerdist also produces content for television including @midnight for Comedy Central and All Star Celebrity Bowling for AMC. Further, Nerdist hosts live events around the country such as The Nerdist Podcast Live! and Course of the Force, an annual lightsaber relay in partnership with Lucasfilm LTD. Legendary Entertainment acquired Nerdist Industries in August 2012.

About San Diego Comic-Con International
Comic-Con International: San Diego is a nonprofit educational corporation dedicated to creating awareness of, and appreciation for, comics and related popular art forms, primarily through the presentation of conventions and events that celebrate the historic and ongoing contribution of comics to art and culture. For more information on this year’s San Diego Comic Con go to http://www.comic-con.org/cci