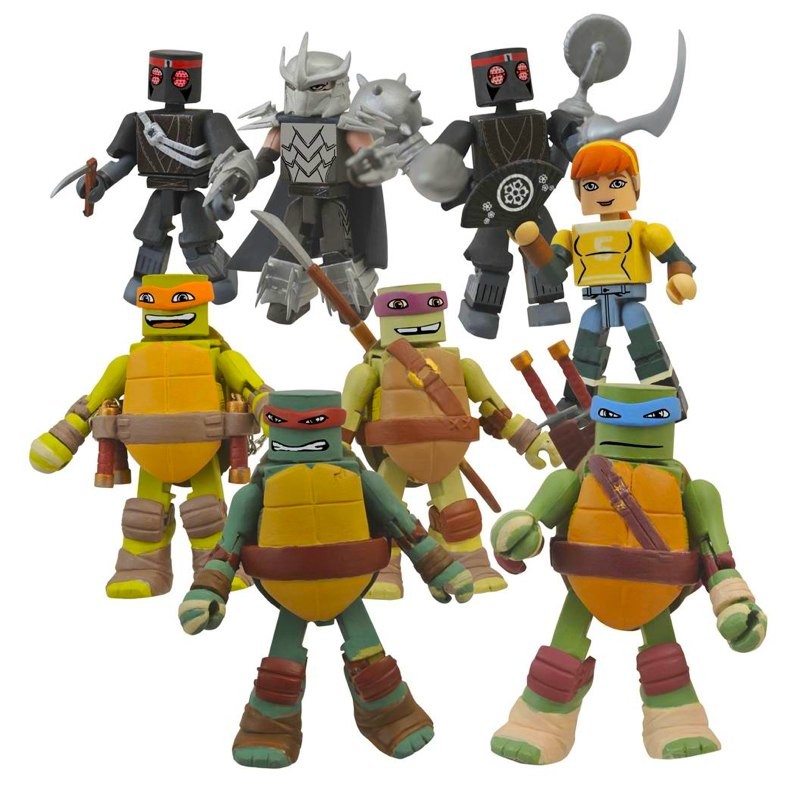 The Teenage Mutant Ninja Turtles are more popular today than ever before. The newest animated series on Nickelodeon is beloved by new and longtime fans alike, creating a diverse audience hungry for new stories, media and merchandise. With that audience in mind, Nickelodeon has partnered with Diamond Select Toys (DST) to create a similarly diverse array of toys and collectibles for fans of the hit franchise, with the first products scheduled to debut at the 2014 Comic-Con International in San Diego.

“The Teenage Mutant Ninja Turtles are one of those brands that any company would love to work on,” says Diamond Select Toys president Chuck Terceira. “Not just because it’s so popular today, but because it’s such a long-lived property, with distinctly different incarnations of the Turtles and their colorful supporting characters stretching back to the late 1980s. Plus, it’s just a heck of a lot of fun. They’re turtles who fight ninjas, robots, and talking brains. What’s not to love?”

“The depth of the Teenage Mutant Ninja Turtles franchise allows us to continue to create new products that will resonate with both new and loyal fans,” said Manuel Torres, Senior Vice President, Global Toys and Publishing, Nickelodeon Consumer Products.  “Partnering with Diamond Select Toys to create a variety of products is a perfect example of the momentum of the Heroes in a Half Shell.”

Comic-Con International in San Diego, which runs from July 24-28, will see the first physical Teenage Mutant Ninja Turtles products from Diamond Select, two translucent Minimates mini-figures of Leonardo and Michelangelo.  These products will be handed out for free (while supplies last) daily during the convention at the Diamond Select Toys booth (#2607) and Nickelodeon booth (#4113), respectively.

Products from several different categories will begin to hit stores in September, including:

•    Teenage Mutant Ninja Turtles Minimates Series 1: The cast of the animated series has been transformed into a series of 2 -inch block figures as part of the wide-ranging Minimates brand. Each figure in the line features interchangeable parts as well as their trademark weapons. Characters include the four Turtles, April O’Neil, Shredder, Foot Soldiers, Foot-Bot, Kraang and Exo-Armor Kraang and are available in blind bags and two-packs. Sold at comic shops, specialty stores, Kmart, Sears and Toys “R” Us.

•    Teenage Mutant Ninja Turtles Vinyl Bust Banks: The four turtles will be re-created from the waist-up as full-color vinyl money banks. Striking action poses with their trademark weapons, each 7 inch bust is based on 3D data from the animated series, and will feature collectible-quality sculpting and paint, as well as a coin slot and access door. Sold at comic shops, specialty stores and Toys “R”Us.

•    Michelangelo Metal Bottle Opener: A classic image of Michelangelo enjoying a slice of pizza, taken from promotional artwork for the 1987 cartoon series, has been turned into a 3D metal bottle opener, with magnets on the back so it can be hung on any metal surface. Sold at comic shops and specialty stores.

•    Michelangelo Pizza Cutter: Michelangelo’s mind is always on pizza, and now his head will help slice it! This pizza cutter shaped like Michelangelo’s head is a must-have for any pizza party, Turtle-themed or otherwise. Sold at comic shops and specialty stores.

Diamond Select Toys and Collectibles, LLC was founded in 1999 by sister company Diamond Comic Distributors, Inc. Envisioned to create unique and exciting collectibles for children and adults alike, the company has licensed a vast array of pop culture properties to be turned into merchandise. In 2007, Diamond Select Toys acquired select assets of the New York design studio Art Asylum, creators of the global Minimates brand. Minimates have been recognized as the #1 selling block figure in the world and were the first toys ever to be inducted into the ToyFare Hall of Fame in 2007. With partners including Marvel Enterprises, Universal Studios, EA Games, Twentieth Century Fox, Warner Bros., Nickelodeon and Sony Pictures, Diamond Select manufactures a wide variety of collectible products, and is headquartered in Hunt Valley, MD. For more information, visit www.diamondselecttoys.com.

About Nickelodeon
Nickelodeon, now in its 35th year, is the number-one entertainment brand for kids. It has built a diverse, global business by putting kids first in everything it does. The company includes television programming and production in the United States and around the world, plus consumer products, online, recreation, books and feature films. Nickelodeon’s U.S. television network is seen in almost 100 million households and has been the number-one-rated basic cable network for 19 consecutive years. For more information or artwork, visit http://www.nickpress.com.  Nickelodeon and all related titles, characters and logos are trademarks of Viacom Inc. (NYSE: VIA, VIA.B).