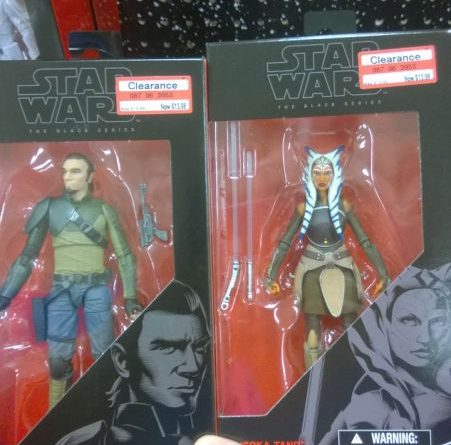 For the past couple of months, we’ve made fruitless journeys down Target’s Star Wars aisle hoping to find new figures to buy, or at least have something to write about. Unfortunately, the only new releases, or restocks for that matter, have been the Takodana Encounter set and Mission Series 2-packs featuring Snap Wexley & Snowtrooper and Sidon Ithano & First Mate Quiggold.

Yesterday, after seeing a couple of reports online, we stopped to find several items on clearance. That included several Mattel Hot Wheels items, the Titanium vehicles, Class II and Class II Deluxe vehicles, the large Black Series TIE Fighter, Mission Series packs, and Black Series 6″ figures. What surprised us the most was that, while they were on clearance, Target had fresh stock of the Titanium vehicles and Black Series figures, including Ahsoka Tano and Kanan, two figures making their first appearance at our store.

We also spotted a new Neat-Oh! Star Wars vehicle tin, which can be used to hold Titanium or Hot Wheels ships and character cars.  While a tin with Millennium Falcon artwork has been on the shelf since at least the beginning of the year, suddenly there was a new tin featuring The Force Awakens graphics on it. As far as we can tell, that was never on the shelf at regular retail.

While not on clearance, there was also fresh stock of the Jakks Pacific Big Figs and some Armor Up figures from Hasbro.

The baffling thing is that the pegs for the Titanium vehicles have been empty for at least two months and now new stock shows up just to go on clearance?  Where has it been all this time? Why, after having stale Black Series figures (Resistance Troopers and Finn) for the past two months does the store have the Ahsoka and Kanan wave just as clearance starts? Where was the holdup? Was it with the Target distribution center sitting on this stuff or did it just arrive from Hasbro?

If Target isn’t able to stock empty pegs for two months coming off a huge hit movie like The Force Awakens, what happens in the future if a movie, say Rogue One, doesn’t hit as big?  One thing we can hope for is that Hasbro has a better handle on what to release for the movies going forward. It didn’t help them, or stores such as Target, that they released nine vehicles last September and only four of them were actually in the film. We don’t even want to do a count on the action figures.

Check out your Target stores over the next few days because you may just find that cool toy you’ve been looking for. And it might be at a discount.