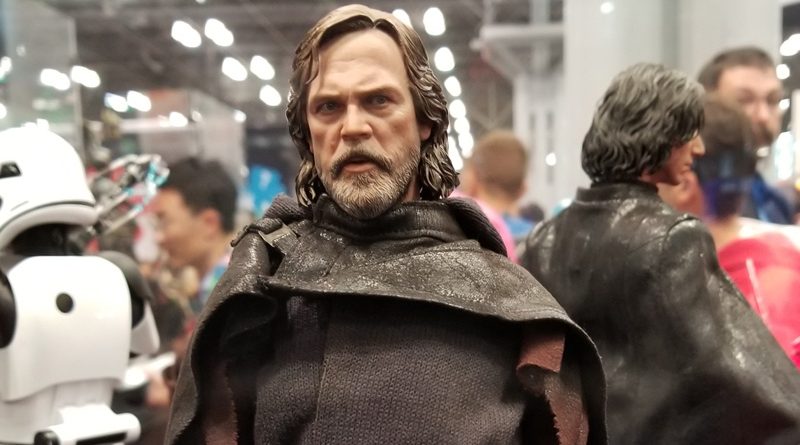 Sideshow unveiled two new Hot Toys figures from Star Wars: The Last Jedi at NYCC; Luke Skywalker and Rey. Luke is in his Jedi Exile outfit while Rey is in her new Jedi Training outfit. Also from The Last Jedi were the new Executioner Stormtrooper and two versions of the Praetorian Guards. Kylo Ren, BB-9E, and the Revenge of the Sith Anakin Skywalker, and the new animated version of Boba Fett were also on display from the Hot Toys line.

Not to be outdone, Sideshow was showing off their new Mythos Obi-Wan Kenobi which looks amazing and has some incredible detail on his outfit and backpack. New releases of the Empire Strikes Back bounty hunters Bossk, Dengar, and Zuckuss were on display next to Han Solo frozen in Carbonite. Premium Format statues of the new Rogue One characters Rey and K-2SO were in the case next to Han Solo and Luke Skywalker. Rey and BB-8, Phasma, and a First Order Stormtrooper rounded out the statue displays.

One of the most impressive pieces was the life-sized K-2SO standing at the front of the booth.

We asked one of the Sideshow reps if the Mythos Obi-Wan is successful will they continue the line and that seems to be the plan. We also asked about the Ralph McQuarrie Darth Vader that was shown off a couple of years ago and if there were still plans to release it. It seems for now that the line is on hold but has support from Sideshow so we may see it in the future, but nothing is definite.