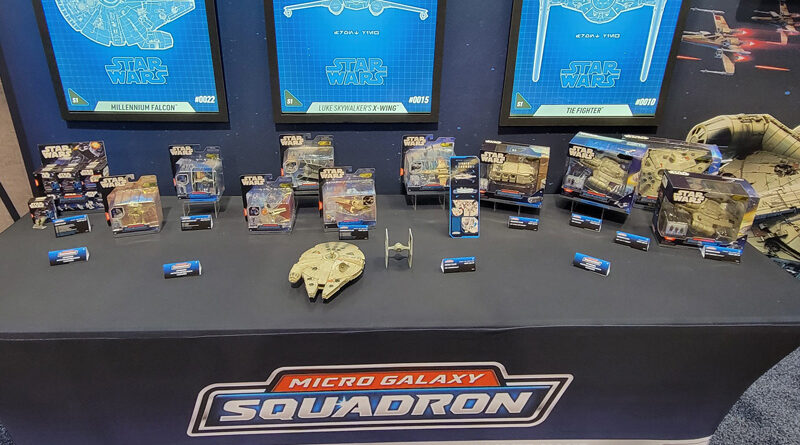 While it’s only an opinion, we think that one of the best announcements during Celebration Anaheim was Jazwares launching their new Micro Galaxy Squadron. Fans of Action Fleet have been asking for a scaled line of ships and vehicles and Jazwares delivers with six classes of vehicles ranging from blind boxed Scout Class for $6 all the way up to the Assault Class Millennium Falcon, which features lights and sounds, for $45.

Micro Galaxy Squadron will have both regular releases along with store exclusives and some chase releases, the white TIE Fighter for example, is limited to 5,000 pieces. We noted which vehicles are store exclusives in the list below, that information was taken from a press release we were given at Celebration.

The figures included with the ships and vehicles do have limited articulation in the arms and legs and while small, around 1-inch, they seem to have better paint applications than the Action Fleet figures did.

While the larger classes of ships will be fun, the blind boxed Scout Class Mystery Packs will help expand your displays. The first series features eight releases and include mostly characters with speeder bikes but we do see an AT-RT as well. On the package there are three sets listed as chase vehicles, however all three were in the case at Celebration and we know they’re Cobb Vanth, IG-11, and a Scout Trooper.

We took a short video of the Millennium Falcon lights and sounds and how it opens for use with the figures.

All of the ships in the first release will be out in the next couple of months with future waves already in the planning stages. After speaking to the Jazware reps, we can take a good guess at a couple of the releases based on the artwork on their banner; Republic Gunship and AAT Tank.

We asked about the possibility of capitol ships in the line but since the vehicles are all in close scale to each other, larger releases may or may not be in the cards. We asked about some other ships such as the Ghost from Rebels and while that’s one they’ve looked into, it is a larger ship than the Millennium Falcon. And that’s before you start looking at the two versions of the Phantom. Hopefully the line will be successful and ships like the Ghost will get a look in the future.

We can expect repaints in the line as they’ve already announced two versions of the TIE Fighter, Razor Crest, and AT-ST. It would be fun to see all of Red Squadron in X-Wing format or additional Jedi Starfighters going forward.

Below is a close look at a Scout Trooper and Speeder Bike from the Scout Class Mystery Packs. Thanks to Jazwares with providing us the sample to review. As we mentioned, the Scout Trooper does have limited articulation in the arms and legs. The arms, at least, are similar to Action Fleet in that they’re tied together, the don’t move independently. The Speeder Bike itself doesn’t feature any moving parts. As you may be able to see from the photos, the bike was a little warped coming out of the package. Not unexpected for a small toy using today’s plastics. A little heat from hot water or a hair dryer should allow us to straighten it out. Except for the AT-RT, the speeders will include a flight stand that has the Star Wars logo on it. Not sure if the small tab on the back will serve a purpose or if it’s just there to make the stand more stable.

We’re very excited for this line and, as mentioned, think that fans of Action Fleet may find a lot to like about the new Jazwares Micro Galaxy Squadron.