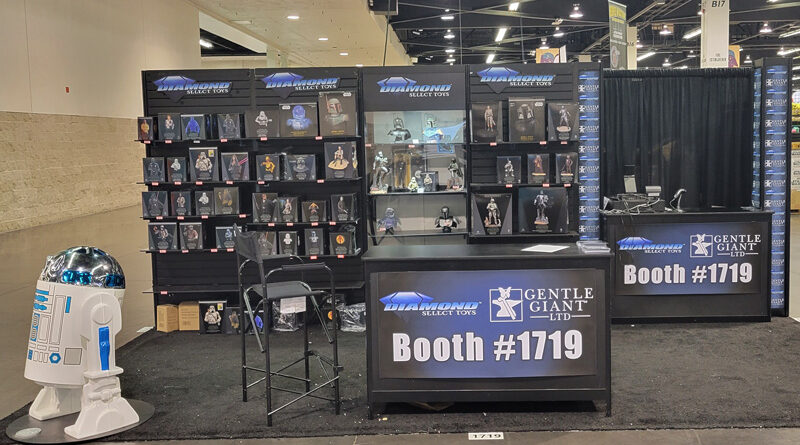 Gentle Giant and Diamond Select Toys had many of their new and upcoming products on display at Celebration Anaheim. Several new items of note were a large 1:6 scale Wampa, Ellors Madak, Pre Vizsla, and Bo-Katan busts, the Milestone Ahsoka and Darth Maul statues, and 1:7 scale Premier Collection Leia Boushh statue.

Gentle Giant may have had their newest Jumbo figures on display at New York Comic Con last year, but this was the first we saw the upcoming Concept Luke Skywalker jumbo in person. They also had the Imperial Commander, which was available for pre-order during Celebration, both versions of The Mandalorian, and Grand Admiral Thrawn, which really pops with the bright blue portrait and white Imperial uniform.

Another highlight of their booth was the store where they were offering previously sold out items such as the Celebration Chicago Hera bust and Darth Maul statue, along with the animated Ahsoka Tano bust. They had various other busts, Milestone statues, and Legends in 3D busts as well.

Along with the Imperial Officer Jumbo, a Remnant Stormtrooper mini bust was also available as an exclusive pre-order during Celebration. Premier Guild Members unable to attend Celebration can also pre-order both exclusives from Gentle Giant’s website.