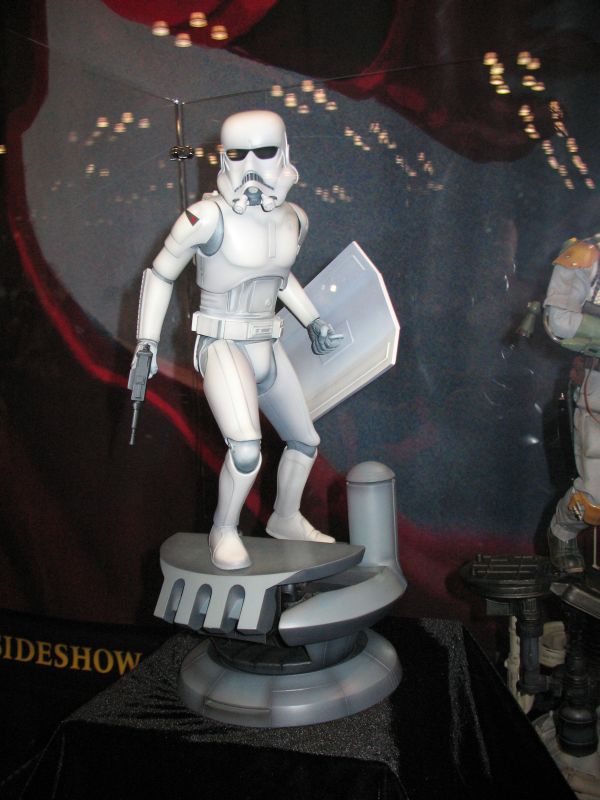 Sideshow made an appearance at New York Comic Con this year and they brought along some fun Star Wars items to show off.

We had our first look at the upcoming McQuarrie line of statues at Celebration Anaheim and at NYCC, Sideshow had a fully painted Stormtrooper on display and it looked phenomenal. Premium Format fans also had another look at the upcoming Boba Fett statue.  As with the first release, the armor on the new Fett will be plastic but the trade off of it not being polystone (or another material) is that the detail is crisp and clear and the statue looks outstanding.

The Force Awakens was represented by a small display of the upcoming Hot Toys First Order Stormtroopers. The Heavy Gunner, Squad Leader and regular versions were all on display and exhibit the quality that we’ve come to expect from the leader in 1:6 scale action figures.  Fans of the OT films also had a chance to see their take on Obi-Wan Kenobi. It’s an impressive figure and the likeness of Sir Alec Guinness is spot on.

Along with the Star Wars collectibles, Sideshow also had a couple versions of the Hot Toys Tony Stark and Iron Man figures.  The Court of the Dead statues, DC and Marvel rounded out the display.

Sideshow wasn’t selling anything at their booth this year but were offering giveaways and some freebies, including gift cards, during the weekend. It was great to see Sideshow make it to NYCC and we hope they come back next year.