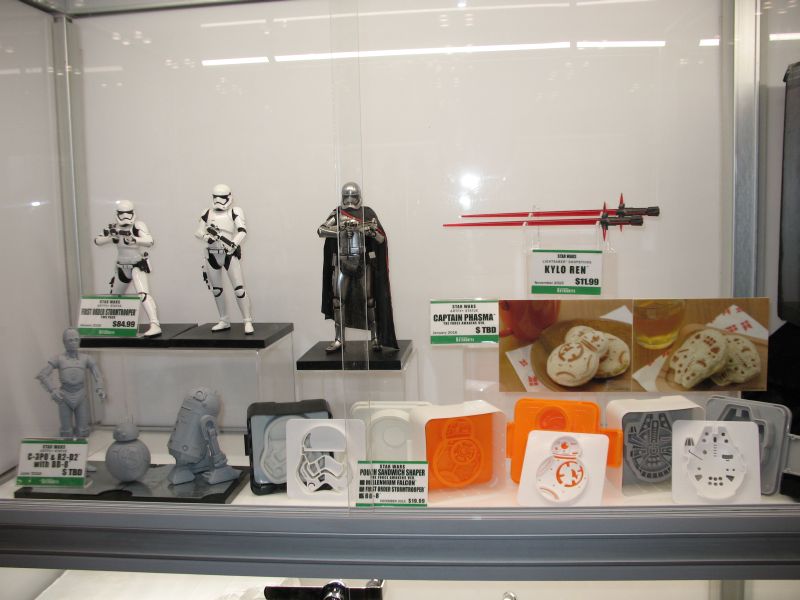 Kotobukiya had several new and upcoming releases on display at their booth this past weekend at New York Comic Con.  The Captain Phasma and First Order Stormtrooper ARTFX+ statues were joined by a new 3-pack from The Force Awakens that will feature C-3PO and R2-D2 along with the newest droid celeb, BB-8.  The 3-pack won’t be out until June 2016 and no price was given.  But you don’t have to wait that long to own Phasma who just went up for pre-order from BigBadToyStore and is listed as due in April.

We had a new look at the fully painted AT-AT Driver, estimated to be due later this month, along with the Snowtroopers and Barnes and Noble exclusive Utapau Clone Trooper and TC-14.

Rounding out the Star Wars display was an assortment of food related items including chopsticks, pouch sandwich shapers and boiled egg shapers.

The Marvel Bishoujo line will expand with Spider Gwen while Magik will join the Marvel ARTFX+ line.  Harley Quinn version 2 is coming to the DC line of Bishoujo statues while ARTFX+ fans have two Batman Arkham Knight game statues to pick up in December; Batman and Arkham Knight.

Anime and Manga collectors have several upcoming releases to look forward to as well.

We were unable to attend the Kotobukiya panel which was in the afternoon on Sunday so we don’t know yet if anything new was reported. One thing that we noticed was missing was any mention of the announced Bishoujo Stormtrooper. That statue wasn’t included in the panel at Celebration Anaheim either and we didn’t think to ask about her while we had the time.