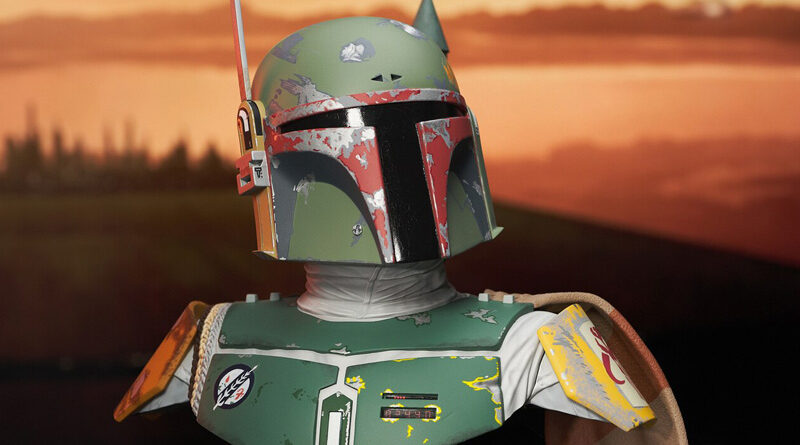 Get ready for the biggest brawl of all! A plethora of new items hit comic shops this week from Diamond Select Toys and Gentle Giant Ltd., and they’re all inspired by some of the toughest fighters in the business! The karate masters of Cobra Kai take on Scorpion from Mortal Kombat, while Marvel’s Thing takes on a team of killer kaiju! Also, Boba Fett was there! Read on for details, then find your nearest store at comicshoplocator.com, or order online at diamondselecttoys.com and gentlegiantltd.com!

A Diamond Select Toys release! It’s the return of Godzilla! The popular Godzilla Vinimates 4-inch vinyl figures are back in a series of two-packs, pairing past with present, and pitting enemies against each other! Godzilla 1954 meets his future counterpart, Godzilla 1999! Godzilla 1962 faces off with Mechagodzilla! Burning Godzilla 1995 teams up with Rodan! Each 4 inch figure features an articulated neck, and comes packaged in a full-color window box built for two! Designed by Barry Bradfield! (Item #AUG212421/22/23, SRP: $19.99)
https://www.diamondselecttoys.com/godzilla-1954-godzilla-1999-vinimates-two-pack/

A Diamond Select Toys release! It’s clobberin’ time! The ever-loving blue-eyed Thing arrives in the Premier Collection as an all-new classically styled statue! The Fantastic Four’s rocky curmudgeon strikes a fighting pose in front of a poster announcing an upcoming wrestling match, and clocks in at about 9 inches tall. Featuring detailed sculpting and paint applications, this statue is limited to only 3,000 pieces and comes packaged in a full-color box with a certificate of authenticity. Co-design and hand sculpt by Clayburn Moore, co-design and concept illustration by Caesar! (Item #APR212360, SRP: $175.00)
https://www.diamondselecttoys.com/thing-premier-collection-statue/

A Gentle Giant Ltd. release! The Star Wars universe’s favorite bounty hunter is now a Legend in 3D! Measuring approximately 10 inches tall, this half-scale bust of Boba Fett is based on his appearance in Star Wars: The Empire Strikes Back, and features detailed sculpting and paint applications. Limited to only 1,000 pieces, it comes packaged in a full-color box with a numbered certificate of authenticity. Designed by Joe Allard, sculpted by Joe Menna! (Item #MAY212117, SRP: $200.00)
https://www.gentlegiantltd.com/star-wars-the-empire-strikes-back-boba-fett-legends-in-3-dimensions-bust/