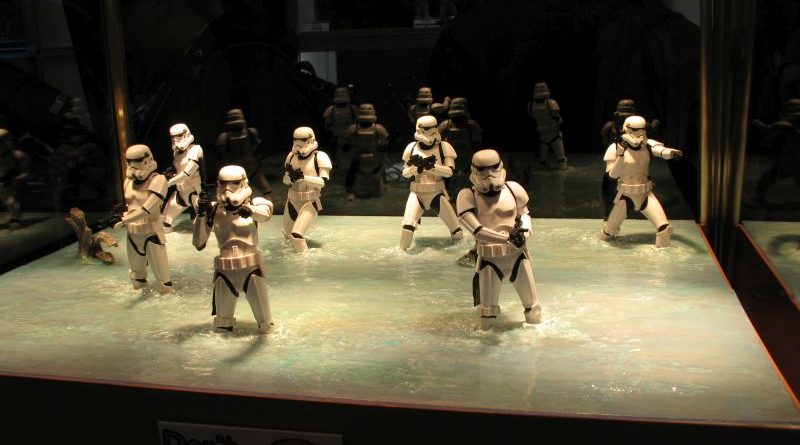 Kotobukiya recently announced their ARTFX Kylo Ren statue and it was on display this weekend at New York Comic Con along with several other new statues from both The Force Awakens and Rogue One.

Joining Kylo Ren in the 1:7 ARTFX line will be Darth Vader which releases this month while the Kylo statue is scheduled for February.

The 1:10 ARTFX+ line is adding several new troopers including a Scarif Stormtrooper 2-pack and Death Trooper from Rogue One and a First Order Snowtrooper and Flametrooper 2-pack from The Force Awakens. The Scarif Stormtroopers along with K-2SO should be released in May while the Death Trooper will be out in June.  The First Order troopers weren’t shown with a release date.

Some of Koto’s most popular items are those in their food line including their new Chopsticks Battle sets which pair off Kylo Ren & Rey, Darth Vader & Luke Skywalker, and Darth Maul & Obi-Wan Kenobi.  Also featured in the display were egg and sandwich shapers and their BB-8 silicon tray.

Rounding out the Star Wars releases on display were new business card holders.

Kotobukiya had new items in their video game lines, which we didn’t take photos of, as well as their Marvel and DC lines.  They were showing off the new Thor, Loki, Squirrel Girl, and Spider-Gwen Bishoujo statues in the Marvel line and Black Canary, Harley Quinn, and Wonder Girl from DC. Spider-Gwen, Canary, and Harley are available now with Thor and Loki coming in January and February respectively.  Wonder Girl is due in December.