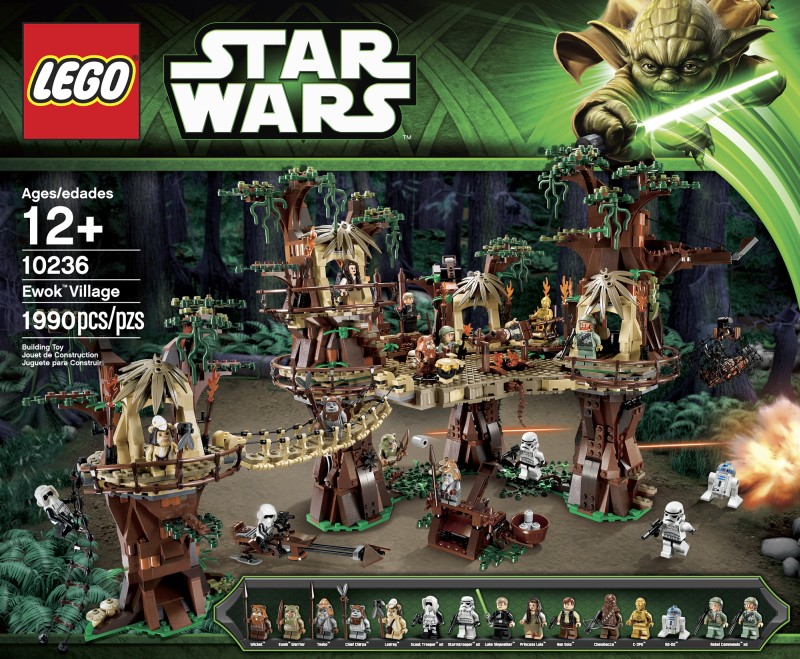 Well, that didn’t take long.  On Friday, Lego officially announced their exclusive Lego Village (10236) for later this year.  Due in September, the Lego Store and Shop.Lego.com exclusive will be priced at $249.99.  At 1,990 elements, this is the 8th largest Star Wars set produced and second in minifgure count with 17.

Included in the minifigures will be three new Ewoks; Wicket, Teebo and the Ewok Warrior.  Luke Skywalker and Princess Leia get updates with new elements, including the hair piece for Leia we mentioned Thursday.  The two Scout Troopers also feature new designs.

As far as the build goes, the four trees feature huts that rotate offering the ability to expand the playability of the set, there are rope walkways, a figure slide and catapult.  Coming in at 14″ tall, 21″ wide and 13″ deep, this is one of the larger sets designed for the Star Wars license.

Press release and photos are blow but make sure to head over to the Lego channel on YouTube to see the Lego Design video for the set.

Travel to Endor™ and visit the treetop home of the Ewoks. Jut like in Star Wars™: Episode VI Return of the Jedi, this recreation of the Ewoks’ forest dwelling is packed with cool functions, including the tree-trunk hideout, secret Lightsaber stash, spider web, net traps, slide, catapults and an elevating throne. Use the rammer function to take out the Scout Trooper’s speeder – just like in the movie! Realistic details include rope walkways, vine and leaf elements, kitchen, food storage area, bedroom and a planning room. The Ewok Village set is the perfect addition to your LEGO® Star Wars collection. Includes R2-D2™ and 16 minifigures with weapons: Luke Skywalker™, Princess Leia™, Han Solo™, Chewbacca™, C-3PO, 2 Rebel soldiers, 5 Ewoks™ (including Wicket™, Teebo™, Chief Chirpa™ and Logray™), 2 Scout Troopers and 2 Stormtroopers™