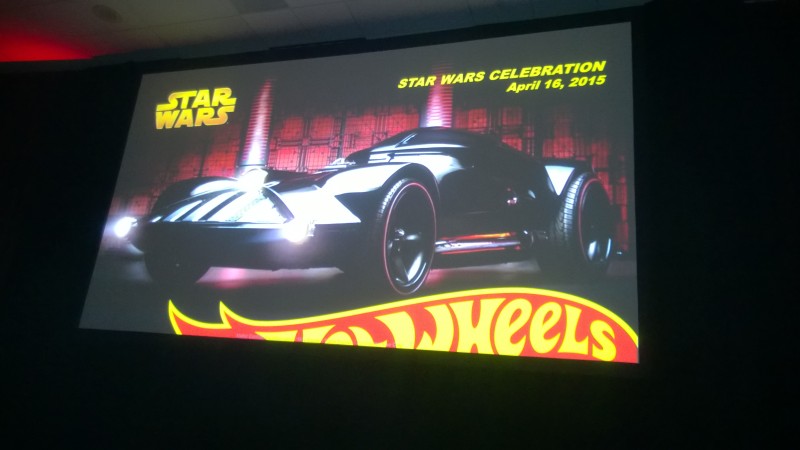 The Hot Wheels panel ranked as one of our favorites because we not only got to see some upcoming product but the design team also spoke about how they go about picking existing car models to add Star Wars graphics to as well as what it takes to come up with the elements for a character car.

After introducing the Hot Wheels team they spoke about the Hot Wheels brand which was established in 1968 and continues today as the top selling toy in the world based on number of units sold. The approach to Star Wars is mixed covering ships from the films and animated shows, character cars that are designed to represent specific people or creatures from the films and the graphic cars which are standard Hot Wheels models featuring paint and logos to represent Star Wars.

The Hot Wheels team spoke about the 1:1 scale Darth Vader car that was on display on the floor and showed a quick video of it in action. They went on to speak about their R2-KT character car that was being sold during the weekend to raise money for Star Wars Force for Change.

Moving on, the team referenced the 2014 Themed Assortment of graphic cars that were sold exclusively at Walmart. This was followed up with the announcement of a new line called the Pop Culture Assortment. The Pop Culture cars feature graphics of characters on them and will have a complementary paint scheme. Shown were cards backs for Luke, Leia, Han, Vader, C-3PO and R2-D2. They’ll be out this summer.

At the end of 2014 Walmart had their exclusive Themed Assortment graphic cars that were based around movies and the card backs featured movie poster artwork. The next Themed Assortment of graphic cars will be based on Factions such as Republic, Separatists, Rebel Alliance, Galactic Empire, Jedi Order, and Sith. There will be two additional Factions that won’t be announced until later and should be from The Force Awakens.

The Themed Assortment cars are based on existing Hot Wheels models and the designers look for models that seem to represent the character or event they’re going to depict. Examples of designs for the movie Themed Assortment were cars shown before teasing the new Factions cars.

As with the movie cars from 2014, the Pop Culture and Factions lines will have a one-time production run so when they sell through they’re gone.

The new Hot Wheels Ships line has been highly anticipated and it was announced during the presentation that the first wave will launch for May the 4th. The line will include mostly Original Trilogy ships including the Millennium Falcon, X-Wing, Y-Wing, TIE Fighter, Snow Speeder and Slave I. The Ghost from Rebels is also included as is a Droid Fighter. Playsets and a Death Star carrying case will be along to go with the new ships. This fall will also see the launch of the Flight Controllers. They feature lights and sounds and will have the ability to attach up to three ships so you can battle with your friends.

The Character Cars will continue in 2015 with single releases, 2-packs and multi-packs which will feature exclusive paint decorations for some cars.

Unlike the Themed and Pop Culture Assortments, the character cars are unique designs and take cues from the character to inform the design. For example, Obi-Wan Kenobi is represented by a classic roadster that actually used a belt to hold the hood closed so the belt from his Jedi robes is incorporated in that way. The Leia car has the silver belt from her Yavin ceremony dress in the grill and the rear wheels are her iconic hair buns.

Cars that will be released in the near future, or may even be out no, include the Chopper, Boba Fett, Princess Leia, Obi-Wan Kenobi, the Inquisitor and Wicket the Ewok.

For the fall we can look forward to more Rebels characters including Kanan, Zeb and Ezra along with Luke Skywalker from Return of the Jedi and Anakin Skywalker which will be a double-sided car and come in a 5-pack. Some of the cars, such as Luke and Ezra, will be packed in with track sets.

One fun Easter egg that the Hot Wheels team mentioned was that each Character Car is marked with a faction symbol on the bottom. That is all except one, the Tusken Raider car doesn’t have a faction.

A San Diego Comic-Con exclusive was mentioned but they wouldn’t give specifics because it’s related to The Force Awakens.

There was one final sneak peek slide that they moved passed too quickly to photograph and was so quick we didn’t catch what was on it.

At the end of the panel it was asked where the female characters from Rebels were. The Hot Wheels reps said that we’ll see Sabine and Hera in the line.

Although the smaller ship line was shown early in the presentation, nothing was mentioned about the larger die-cast ships that were in the booth. According to Hot Wheels, they will be in the Elite line and include much more metal than the smaller releases. They should also feature opening panels and removable parts, such as landing gear. They’ll ring in at a higher price point, probably in the $75 range.

One of the final questions was about a character car of the Jawa and according to the panelists, a Jawa is on the short list of character cars for future waves.