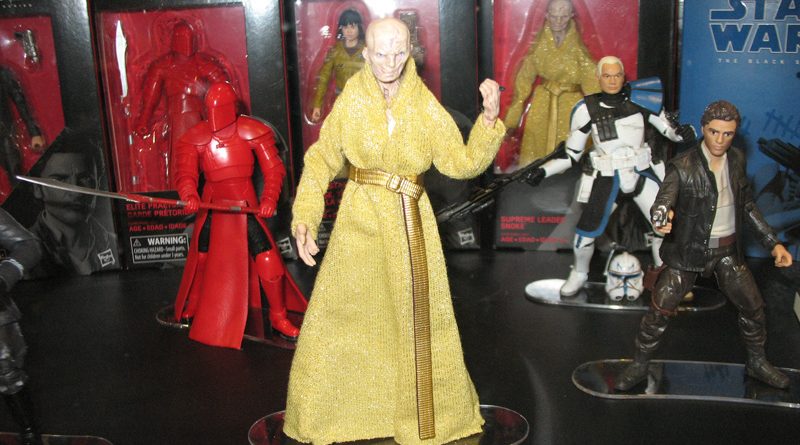 Hasbro’s display of their Black Series line included not just the 6″ action figures but also the FX lightsabers and Poe Dameron’s helmet. The 40th Anniversary and new The Last Jedi waves of Titanium figures were in a case along with the 6″ 40th Anniversary carded figures. The exclusive Luke X-Wing, from Celebration, and R5-D4 from GameStop were not on display.

The main attractions were the new and upcoming releases in the main line. Both the first and second waves of The Last Jedi were on display and, after the 40 Years of Play panel, Snoke joined the case. We also had new looks at the Fans’ Choice Jaina Solo figure, Lando, and Qui-Gon Jinn, plus the Rebel Trooper figure. For fans of the new deluxe sets, both the recently released speeder sets for Luke and Rey were in the case next to the amazing Dewback and Sandtrooper which will be next in that line.

Hasbro also had a case set up featuring Luke’s Landspeeder that included the new Black Series release, a prototype of the speeder, and a vintage Kenner Landspeeder complete with instructions, R2-D2 and a graded Luke Skywalker action figure. As we mentioned in the 40 Years of Play panel article, the only new Black Series announcement was the new role play Darth Vader helmet. Unfortunately, there was no sample on hand this weekend.