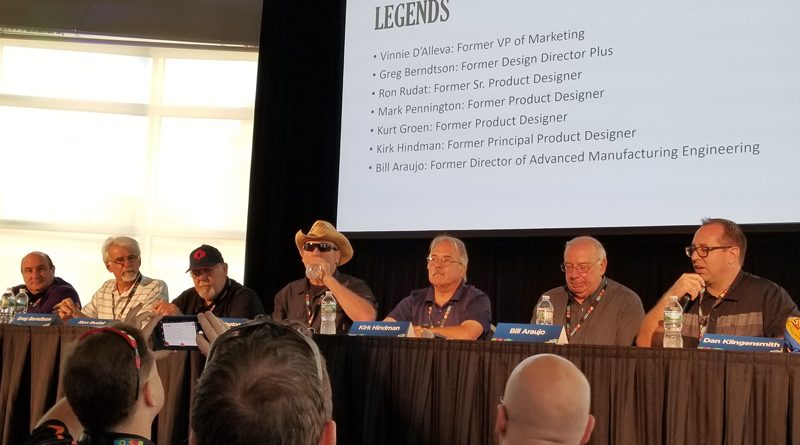 The Characters panel followed a similar path as the Vehicles panel in that the panelists took us through the process for designing and manufacturing the action figures. Research was the first step in designing the figures, including concept design, color studies for the characters themselves as well as all of the weapons and accessories they would come with. As we mentioned in the Packaging article, Hasbro employees were often used as models for the action figures and had their likenesses incorporated into the line.

One major difference between the action figures and the vehicles was that the figures started with a standard buck, which had the articulation points on it that every basic figure would include. Bondo could be put on top of the buck and then the details of the figure would be sculpted into it. Web belts, pouches, clothing detail and all other elements would be created on the buck and the articulation points helped the sculptor to know if anything they were adding would interfere with the figure being able to sit or fit into a vehicle or hold their accessories the right way.

The figures were also sculpted as a 2-up, or twice the size the eventual figure would be. As we showed in the photos from the G.I. Joe display, they could also be painted and sent to the factories as examples of how the production figures should be finished.

As the Real American Hero line continued, information about how the figures were to be done was collected and that allowed freelance sculptors outside of Hasbro to work on the line. Like the vehicles, eventually manufacturing took over and created the tooling molds and created first-shots which were reviewed for accuracy. That process takes a couple of steps before the team would sign off and manufacturing would begin.

Again, a recap of our live Twitter feed from the panel and photos.

#GIJoe characters #HASCON panel. Some of the same info as vehicles so may not have as much new info
Ron Rudat talking about character sketches & color studies #GIJoe #HASCON
Vinnie D’Alleva recounts that 75% of vintage #GIJoe line money came on vehicles, figs supported them. Other way around now #HASCON
Exploded view of a figure to show how to build and price it #GIJoe #HASCON
Looking at sculpting process with Kirk Himdman. Bondo was used for sculpt. Each piece done by different sculptor for speed
Bondo was added to buck and then sculpt outfit and head. Could do sculpt in a couple weeks. Eventually went to freelancers #GIJoe #HASCON