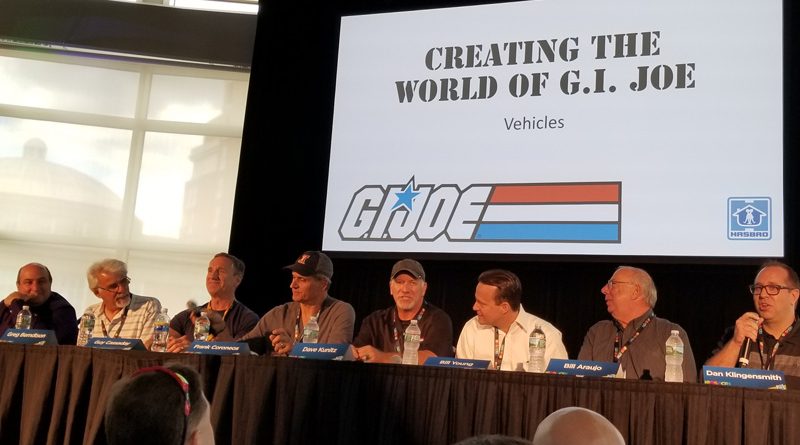 The second of three G.I. Joe panels from HASCON took a look at the design process for vehicles from the Real American Hero line of toys. The Hasbro Legends on the panel were Vinnie, D’Alleva, Greg Berndtson, Guy Cassaday, Frank Coroneos, David Kunitz, Bill Young, and Bill Araujo. The panel was moderated by Dan Klingensmith.

The panelists talked about taking the G.I. Joe line all the way through from the initial research and designs, to color choices, to sculpts, and eventually to manufacturing. David Kunitz even had examples of the Bondo sculpt that was used to create the 1988 Cobra Stiletto along with pieces from a vacuform mold, which he passed around.

If you look at the final slide from the presentation, “Manufacturing Take Over,” there are a lot of steps after the design process that still come into play, things that not everyone may think about. This includes things like drop testing toys to make sure they aren’t going to break or if they’re designed to take a drop, that they behave as intended. Making sure that parts come out of the mold correctly and even which parts should be on molds together are all part of the design of the toys that have to be planned out in advance.

The photos below go along with our Twitter recap of the panel.