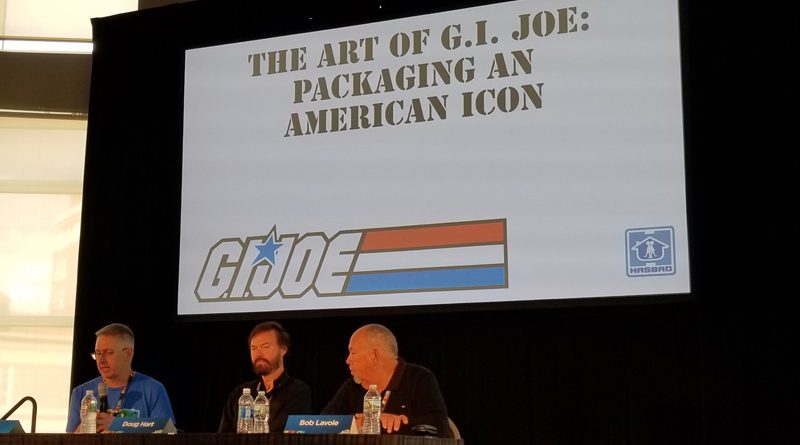 Friday afternoon at HASCON, there were three panels on G.I. Joe. All three looked at what went into making the classic Real American Hero line from the 1980’s. The first panel, moderated by Derryl DePriest, featured artists Doug Hart and Bob Lavoie speaking about packaging artwork and different techniques they used. They spoke a lot about artwork done by Hector Garrido, who was not in attendance. One of the challenges of the packaging artwork was copying each others work so that there was a uniformity to all of the packaging.

For character poses, Doug used comic book art as a guide for posing characters. He also had a selection of photos he’d taken of Hasbro employees making different facial expressions as reference. Several shots of employees and their corresponding photos were highlighted in the presentation. We heard later, during the Characters panel, that the sculptors of the time were quite proud of being able to incorporate a number of Hasbro employees into the action figure line as various characters. Bob Lavoie, for example, became Bazooka. Other well known examples include Kirk Bozigian as Law and Larry Hama, the writer of the Marvel G.I. Joe comic, as Tunnel Rat.

The artwork shown during the presentation, and that on display in the front hall, is exceptionally well done. While the images used in today’s packaging are nice, it can’t compare to the original art that was done for each piece of the classic Real American Hero line.

Below is a recap of our live Twitter feed from the panel along with photos of the slides.