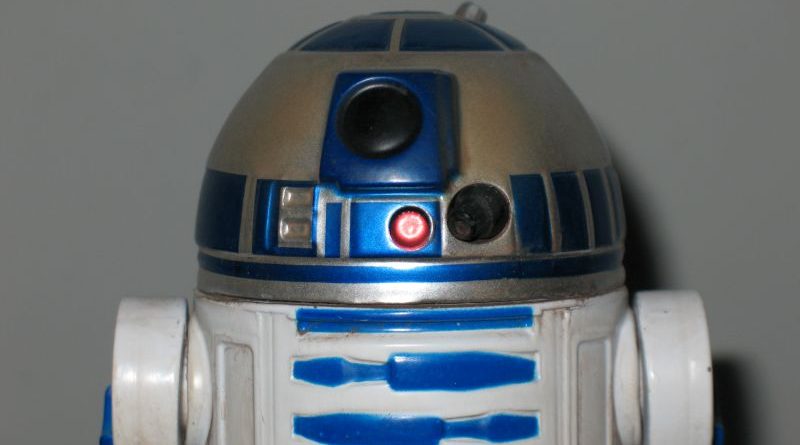 Disney’s die-cast Elite Series makes the perfect line for droids figures and R2-D2 is a great example. The Elite Series of figures debuted in 2015 at the D23 convention, launching with an 8-pack that included exclusive versions of R2-D2 and C-3PO in their Original Trilogy deco. Last week, The Force Awakens versions of both droids went up for sale at Disney stores and online.

R2-D2 is the first figure we’ve purchased from the Elite Series line and we’re very happy with it, it’s very well done. He’s quite heavy being mostly made of metal with a few plastic details on the feet. Unlike many of the other releases, the screw holes on the back have plugs in them that make for a nicer presentation. The dome rotates as do both side legs. The feet are articulated on both side legs and the center leg, so he can stand on two or three feet.

The center leg recesses into the body with a really cool feature; pushed all the way in it locks into place, press it again to unlock it and it drops out, assisted by a spring. It’s a nice solution rather than rotating the dome to retract and deploy the leg, as Hasbro has done on several of their astromech releases. We don’t count it as a point of articulation, but the holographic projector on the dome does rotate and changes angles which adds some character.

Sculpting detail on Artoo is quite well done also, although there are a few details that are obscured by the paint. Generally the paint detail is accurate but there are some subtle areas that should have silver over the blue but it’s lacking. Overall, Artoo has a wash of brown paint to add a dirt effect and it’s subtle enough to highlight the figure without overpowering in any area. The dome is a nice shade of silver without being too shiny and, again, the wash highlights it without taking away from the blues.

Artoo’s body has an assembly seam down both sides but it doesn’t stand out that much. The dome, however, is seamless unlike Hasbro’s 6″ Black Series release. It’s a small detail but one we think is important for the look of the figure.

Our only real complaint are on the foot joints of the side legs. On our example they’re a little soft and if Artoo isn’t balanced, he can tend to lean towards the front. This may be an assembly issue on our figure and others won’t have the same problem. The upside, even leaning all the way forward, he stands up and doesn’t fall over. That’s a bonus if you’re looking for posing options to display your figure.

R2-D2 doesn’t have any peg holes in his feet, or rolling wheels for that matter, but he does come with a stand embossed with the Star Wars logo. That’s the only accessory with this figure.

Although R2-D2 is smaller than the human characters in the Elite Series line, the weight, sculpt, paint, and articulation still make it feel like a good deal for the sticker price. If you’re a fan of Artoo, or droids in general, we would highly recommend Disney’s Elite Series R2-D2.