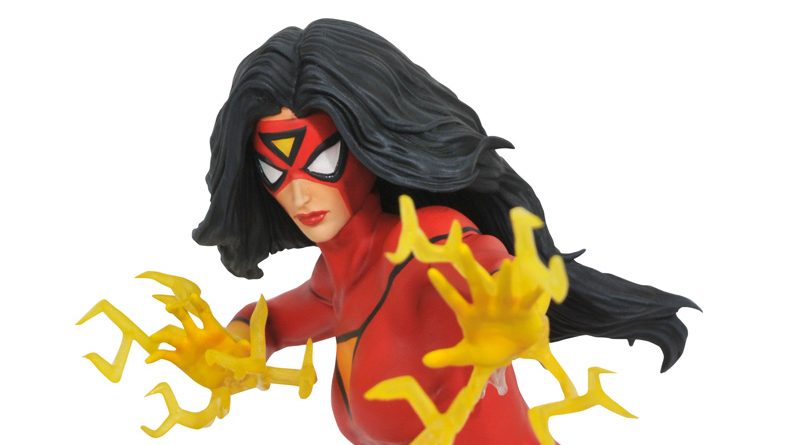 April showers bring May powers, as a slew of super-hero merchandise from DST soars into this month’s Previews catalog! The super swag includes Marvel Select action figures, Marvel Gallery and DC Gallery PVC dioramas, DC Animated busts, Marvel Premier and Milestones statues, and the first-ever DC Comics Vinimates! Plus, new items from Ghostbusters, Alien: Covenant, Elf, Back to the Future and TMNT! Read on for details, reserve your favorites at your local comic shop, or order online at shop.diamondselecttoys.com!

A Diamond Select Toys release! The fowl felon has arrived in the Batman Animated bust series! Oswald Coblepot, the Penguin, is captured in his classic animated appearance, as he appeared on Batman: The Animated Series. Measuring approximately 6 inches tall, the Penguin perches on a pedestal base inspired by the show’s art-deco architecture, holding his ever-present umbrella. This piece is limited to only 3,000 made, and comes packaged in a full-color, hand-numbered box with a hand-numbered certificate of authenticity. Sculpted by Varner Studios! (Item #MAY172501, SRP: $59.99)

A Diamond Select Toys release! Robin sets off on a new adventure! As seen in the follow-up to Batman: The Animated Series, titled The New Batman Adventures, Dick Grayson has grown up and changed his look, becoming Nightwing! This PVC Diorama depicts Nightwing crouched atop a smokestack, preparing to pounce on an unsuspecting thug. This approximately 12-inch PVC diorama features detailed sculpting and exacting paint applications, and comes packaged in a full-color window box. In scale to all Gallery and Femme Fatales PVC figures. Sculpted by Varner Studios! (Item #MAY172499, SRP: $45.00)

A Diamond Select Toys release! Doomsday is here! The massive Superman villain is muscling into DST’s line of busts based on the DC Animated Universe, and he is guaranteed to dominate your Justice League collection! Measuring just under 7 inches tall, this resin bust of Doomsday is balanced on a pedestal base inspired by the League’s Watchtower satellite. This piece is limited to only 3,000 made, and comes packaged in a full-color, hand-numbered box with a hand-numbered certificate of authenticity. Sculpted by Varner Studios! (Item #MAY172500, SRP: $59.99)

A Diamond Select Toys release! Another wall-crawler joins the Marvel Gallery PVC line! Jessica Drew, the original Spider-Woman, has been an Avenger and explored the Spider-Verse, and now she’s the latest 9-inch scale PVC Diorama in the Marvel Gallery line. Measuring approximately 8 inches tall, Spider-Woman takes aim with her bio-electric blasts atop a web-pattern diorama base, and features detailed sculpting and paint applications. Packaged in a full-color window box. Sculpted by Alejandro Pereira! (Item #MAY172529, SRP: $45.00)

A Diamond Select Toys release! The Netflix series of Marvel Gallery PVC dioramas continues with the assassin Elektra! Based on her appearance in Daredevil Season 2 on Netflix, this PVC figure of Elodie Yung as Elektra stands atop a pedestal inspired by a New York City rooftop, uniting it thematically with the other Netflix releases. Measuring approximately 10 inches tall, this diorama features detailed sculpting, exacting paint applications, and an authentic likeness. Packaged in a full-color window box. Sculpted by Varner Studios! (Item #MAY172530, SRP: $45.00)

A Diamond Select Toys release! Another Milestone has been met! The second half of DST’s Marvel Milestones statue set based on Captain America: Civil War is here, and it’s Captain America himself! Raising his shield to deflect a blast of energy, Captain America can stand alone, or pair with the Marvel Milestones Iron Man statue to form a larger scene – face them back to back for a team-up, or face-to-face for all-out Civil War! This approximately 16.75” resin statue is limited to only 1,000 pieces, and comes packaged in a full-color box with a certificate of authenticity. Sculpted by Gentle Giant Studios! (Item #MAY172528, SRP: $199.99)

A Diamond Select Toys release! By the Vishanti! Doctor Stephen Strange has cemented his space in the Marvel Cinematic Universe, and now he has teleported into the Marvel Milestones statue line! Leaping from a portal, Doctor Strange casts spells with both hands in this dynamic statue featuring detailed paintwork as well as translucent sculpted effects. This approximately 14.5” resin statue is limited to only 1,000 pieces, and comes packaged in a full-color box with a certificate of authenticity. Sculpted by Gentle Giant Studios! (Item #MAY172527, SRP: $225.00)

A Diamond Select Toys release! The Spider-Woman of Earth-65 is taking the Marvel Universe by storm, whether she’s fighting alongside other spider-heroes against the Inheritors, or playing with the Mary Janes in a battle of the bands! This 12-inch scale masked variant of our “Spider-Gwen” statue shows her alighting on a pillar, preparing to shoot a webline while balanced on one foot. Sculpted by Clayburn Moore, this resin statue is limited to an edition of 1,000 pieces, and comes packaged with a certificate of authenticity in a full-color window box. (Item #MAY172532, SRP: $150.00)

A Diamond Select Toys release! From the other side of the Spider-Verse comes the rockin’est Spider-hero in town! Mary Janes drummer and protector of New York City Gwen Stacy is the latest Marvel Select action figure from DST, and she’s sure to be one of our best sellers! The approximately 6.75-inch action figure comes with interchangeable raised and lowered hoods, various interchangeable hands, and a sculpted diorama base depicting a fallen robot! Packaged in the display-ready Select packaging with side-panel artwork. Sculpted by Jean St. Jean! (Item #MAY172533, SRP: $24.99)

A Diamond Select Toys release! The Daredevil of Hell’s Kitchen is now the first-ever Marvel Select action figure to be based on the Netflix TV universe! Capturing Daredevil’s costume as it appears at the beginning of Season 2, and featuring the likeness of actor Charlie Cox, this 7-inch action figure features approximately 16 points of articulation and a pair of billy clubs, as well as a sculpted diorama base depicting the elevator from the season premiere! Packaged in the display-ready Select packaging with side-panel artwork. Sculpted by Gentle Giant! (Item #MAY172531, SRP: $24.99)

A Diamond Select Toys release! The TMNT are travelling through time, and going back to where it all began! This all-new assortment of Minimates captures the Turtles as they appeared in their hit 1990s animated series, with classic, instantly recognizable looks!  Donatello takes on Shredder, Leonardo takes on Bebop, and Casey Jones and April O’Neil each take on a Foot Soldier. Each 2-inch Minimates mini-figure features 14 points of articulation and fully interchangeable parts and accessories. Each 2-pack comes packaged on a full-color blister card. (Item #MAY172502, SRP: $9.99/ea.)

Back to the Future 2 Movie Vinimates Vinyl Figures

A Diamond Select Toys Release! Great Scott! Marty McFly and Doc Brown have just jumped forward in time again, and they’re getting new outfits to blend in to 2017! These 4-inch vinyl figures based on the second film in the Back to the Future film trilogy are sculpted in a block-figure style, striking poses straight from the movie poster, and feature articulated necks for further customization. Each comes packaged in a full-color window box.
Future Doc Vinyl Figure (Item #MAY172513, SRP: $9.99)
Future Marty Vinyl Figure (Item #MAY172514, SRP: $9.99)

A Diamond Select Toys Release! Witness the creation of fear! As the whole world braces itself for Alien: Covenant, DST prepares to unleash the top-secret new Xenomorph on their Vinimates vinyl figure line! This 4-inch vinyl figure is based on the new creature design in the new prequel film, and features an articulated neck for further posing options. Packaged in a full-color window box.
Vinyl Figure (Item #MAY172518, SRP: $9.99)

A Diamond Select Toys Release! Christmas is coming, so put an Elf Vinimate on your shelf! Based on the classic comedy film Elf, these 4-inch vinyl figures of Buddy and Jovie each strike a pose from the film, and feature articulated necks for further posing options. Each comes packaged in a full-color window box.
Buddy Vinyl Figure (Item #MAY172522, SRP: $9.99)
Jovie Vinyl Figure (Item #MAY172523, SRP: $9.99)