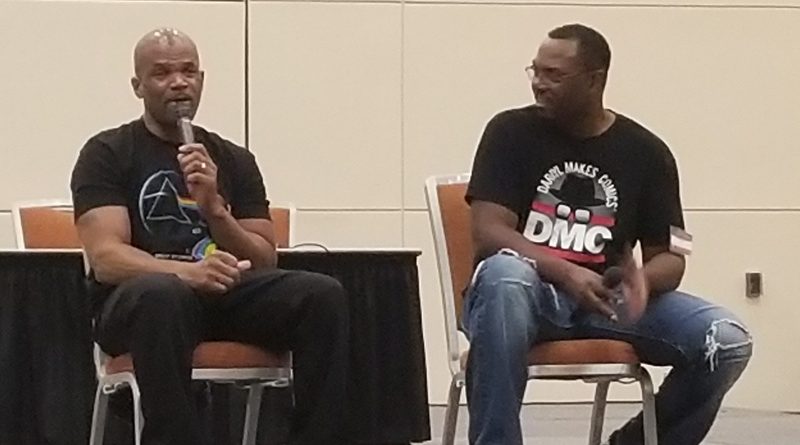 Darryl D.M.C. McDaniels of the hip hop group Run-D.M.C. was at Baltimore Comic Con last week promoting his comic book DMC and on Sunday he attended a panel to talk about his comic and his career.

D.M.C. grew up in New York City and spoke about attending, and loving, school. He was an avid comic reader, mostly of Marvel, and spoke about pretending to be a superhero. When he turned to music, as a DJ, he related that he applied the same imagination that he was a superhero to imagining himself as a great DJ which helped to achieve that goal. As he transitioned to rapping, he infused his lyrics with references to superheroes, keeping that love of comics close to his new career.

In 2014 D.M.C., after speaking with Riggs Morales, he decided to create his own comic, DMC. DMC is based on D.M.C., a superhero looking out for the average person whether he’s taking on criminals or superheroes who are out for themselves. The third graphic novel from D.M.C. debuts this week at New York Comic Con.

The panels on Sunday were pushed back so there was no Q&A during the panel but D.M.C. did leave us with a short wrap about superheroes, which you can see below or on our YouTube channel.