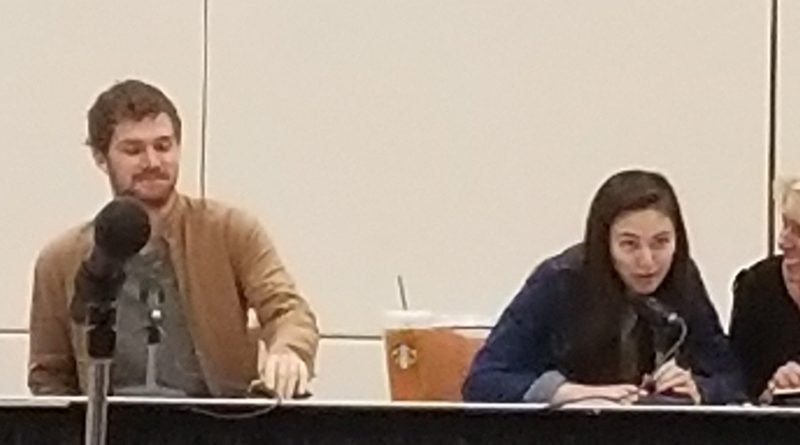 Finn Jones and Jessica Henwick currently star in the Netflix series Iron Fist, but both have also starred in HBO’s Game of Thrones, which led to a wide-ranging discussion during their panel at Baltimore Comic Con.

Being in two of the largest franchises currently in production led to a discussion about other franchises they should be a part of. Jessica was in Star Wars: The Force Awakens and her character, Jess Pava is in the new Poe Dameron comic while Finn had a small role in The Sarah Jane Adventures, tying him to the Doctor Who franchise. They mentioned now needing to be involved with Harry Potter and even Indiana Jones when it was pointed out that Jessica’s character, Nymeria Sand, used a whip on Game of Thrones.

Both actors were asked about their character’s fates in Game of Thrones with Finn thinking that his arc was satisfying. Jessica recounted a scene where she was nearly choked out for real by the actor portraying Euron Greyjoy.

As the discussion moved on to Iron Fist, and The Defenders, Finn spoke about not having much of a lead before starring in his first season. He wasn’t familiar with the character of Iron Fist but has since read the comics. He’s also had the opportunity to add some martial arts training in his preparation for season 2. Iron Fist shot back-to-back with The Defenders but he’s now had about five weeks of training in the lead-up to filming season 2/

When asked about favorite scenes from the shows, Jessica enjoyed punching Davos, played by Sacha Dhawn, while Finn liked punching Charlie Cox as Daredevil. As the conversation of fighting other characters from Iron Fist and The Defenders went on, Jessica jokingly mentioned that Finn only needs to punch Jessica Jones (Krysten Ritter) for a clean sweep of the other heroes. Who would win a fight among The Defenders? Finn thinks that eventually Danny would win that fight but where his character is currently it probably wouldn’t be him, Jessica would win.

Finn and Jessica were asked what they each like about their characters. For Finn, he likes how Danny is an optimist and his strength of spirit while Jessica liked that Colleen used humor and sarcasm as a defense but has since come to admit that she’s not okay.

Covering the Game of Thrones topic, the actors were asked who they thought would end up on the Iron Throne. Jones thinks that it could be destroyed while Henwick said a White Walker could take the throne. They again mentioned that they thought their characters went out in the right way on Thrones.

The topics covered were quite wide ranging and much of the panel was opened up for question and answer with the audience. Unfortunately, the panel wasn’t the full hour as it was delayed due to an incident early in the morning in the convention center. We applaud Baltimore Comic Con for recovering and still allowing the panels to go on, including the questions from the audience.