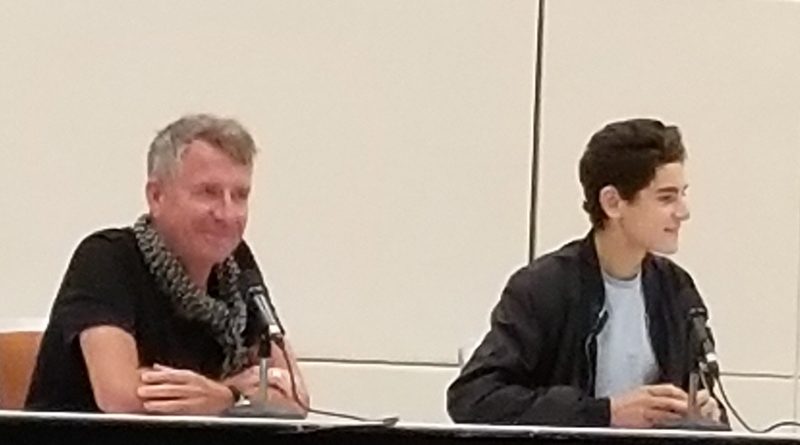 Saturday afternoon during Baltimore Comic Con, Sean Pertwee and David Mazouz attended a panel to talk about their acting careers and their current show, Gotham.

Both actors spoke about getting their start in acting. Sean Pertwee’s father, Jon, was also an actor and portrayed Doctor Who from 1970-1974. Sean grew up around acting and eventually got into the business and has enjoyed it since. He auditioned for Gotham and was given a monologue that was more of a gangster speech than the older more traditional Alfred we’ve seen in previous films. The writers liked what they saw and felt that he’d fit the role at the age Alfred is during the Gotham series, as a more active and kind of bad-ass protector to Bruce.

David’s older sister wanted to take acting lessons and he tagged along, and had fun so he kept it up. He eventually had roles in The Office and Criminal Minds before the series Touch where he co-stared with Kiefer Sutherland. He spoke about landing the role of Bruce Wayne for Gotham. He had several auditions before finally having a hair and makeup test with the show runners. He landed the role after that, finding out when his mother picked him up from school and told him.

David mentioned being a fan of Batman prior to Gotham but once he was cast as Bruce Wayne he began reading more stories and is now an admitted “massive” fan and comic book reader.

One thing that seemed quite obvious from the panel is that Sean and David have a pretty easygoing relationship, joking and cracking wise with each other. The moderated part of the panel was only about 15-20 minutes long by design, leaving a large chunk of the panel for question and answer with attendees.

Questions ranged from what it’s like working on the show to what we may see in the future. Not a lot of details were provided, since the fourth season just premiered the Thursday before the convention, but one piece of info that was interesting is that, later in the season, we’ll see sort of a showdown with Bruce, Penguin, and Gordon with each thinking they have the best idea for how to make Gotham a more safe town.