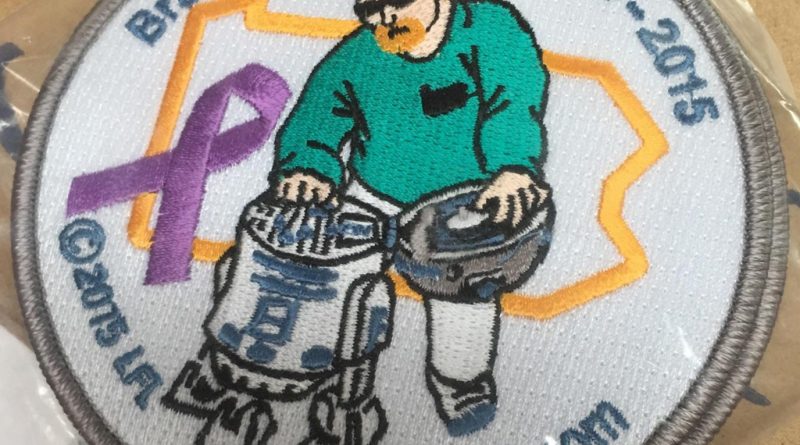 The Pennsylvania Star Wars Collecting Society (PSWCS) is hosting a Star Wars event at the Sellersville Museum in Sellersville, PA today and tomorrow from 12:00 – 4:00 p.m.  During the event, they will be selling a patch to raise money for Fox Chase Cancer Center in the name of Brad Kulp.

Brad was a long-standing member of PSWCS and life-long Star Wars fan and collector. Brad passed away in July 2015 from cancer. He received treatment from the Fox Chase Cancer Center and as a thank you to the doctors and nurses, PSWCS is doing a fundraiser in his name. They will be selling 100 patches featuring artwork by Bill Cable, president of PSWCS. The artwork features Brad and his favorite character, R2-D2, mashed up with Brad’s other love, being a DJ. The patches are $10 and will be sold first at the museum and then online if any are left.

Please read the press release below and if you are in the area, stop by to see all the fun Star Wars collectibles on display at the museum this weekend. In 2015, Pennsylvania Star Wars Collecting Society (PSWCS) member Brad Kulp passed away after battling cancer. During his illness, Brad was treated by the doctors at Fox Chase Cancer Center.

As a thank you to those who cared for Brad, the Pennsylvania Star Wars Collecting Society are doing a fundraiser for Fox Chase Cancer Center in Brad’s name. We will be selling 100 patches featuring original artwork created by Bill Cable for Brad as a gift and later used by Brad to promote his DJ business.

Each patch will be $10 and sold first during the Star Wars Collectors’ Exhibit at the Sellersville Museum in Sellersville, PA.  This is the fifth annual event and was originated by Brad. Fellow PSWCS members held the event last year in memory of Brad and had over 500 people attend.  This year’s event will be held October 8-9 from 12 noon until 4:00pm. Admission to the event is free.

The patch is Lucasfilm approved and will never be reproduced. All of the proceeds from the sale will be donated in Brad’s name to Fox Chase Cancer Center.

About the Sellersville Museum