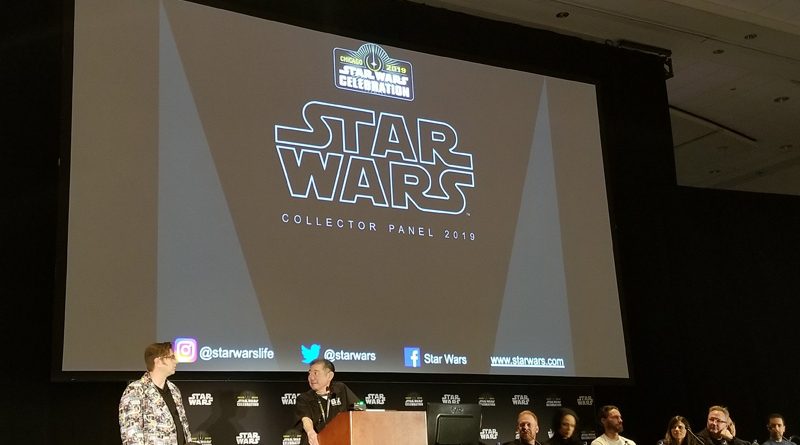 On Friday at Celebration Chicago, Lucasfilm’s Brian Merten hosted the Star Wars Collectibles Update panel where several license holders gave updates on current and upcoming releases. Below is a recap of the panel and a gallery of photos. We live-tweeted the panel with photos and you can see the original thread on Twitter: https://twitter.com/ImpHolocron/status/1116771564098396161

Some of the highlights include EFx, who kicked off the panel, announcing a new Boba Fett helmet and a Stormtrooper helmet based on concept artwork (McQuarrie). Also on the way is a melted version of Darth Vader’s helmet from The Force Awakens, a die cast AT-ST model, Studio Scale models of a Star Destroyer, Darth Vader’s TIE Fighter, and Boba Fett’s Slave I.

Diamond Select Toys recently purchased the assets of Gentle Giant Ltd. and Chuck Terceira, Diamond Select’s president, went over some of the current releases including the Celebration exclusive Hera bust and Darth Maul statue as well as the upcoming Premier Guild releases and the Ahsoka bust. DST plans on looking at some of the pieces Gentle Giant had announced previously but then put on hold. They also announced a new Legends in 3-Dimensions line which will launch with a Darth Vader bust in 1:2 scale.

New license holder, Lladro, is launching a line of porcelain statues called Born to Rebel. The line will include both men and women but the focus seems to be on women characters such as Padme Amidala, Leia, Rey and others.

Kotobukiya is launching a new ARTFX Artist Series of PVC statues in 1/7 scale. Each statue will be created by an artist brought in for the piece they’re working on. We had a look at an artist rendering of Rey, releasing first, and titled “Descendent of Light.” In May 2020 we’ll see Kylo Ren by artist Kamome Shirahama. That is titled “Cloaked in Shadows.” The statues will have interchangeable pieces for multiple ways to display the characters.

Tom Spina of Regal Robot finished off the panel talking about their Chewbacca bust and Tauntaun statue which were for sale at their booth over the weekend. Spina, besides releasing interesting collectibles, is also a restoration expert who has worked on original Star Wars props, some of which were highlighted in his presentation. So while you may not be able to own an original cantina patron mask, you can look for their unique collectibles based on the original props and costumes.

We covered several of the companies that presented during the panel in additional articles, including EFx and Anovos, Diamond Select, Bandai, Heroes & Villians, and Kotobukiya.