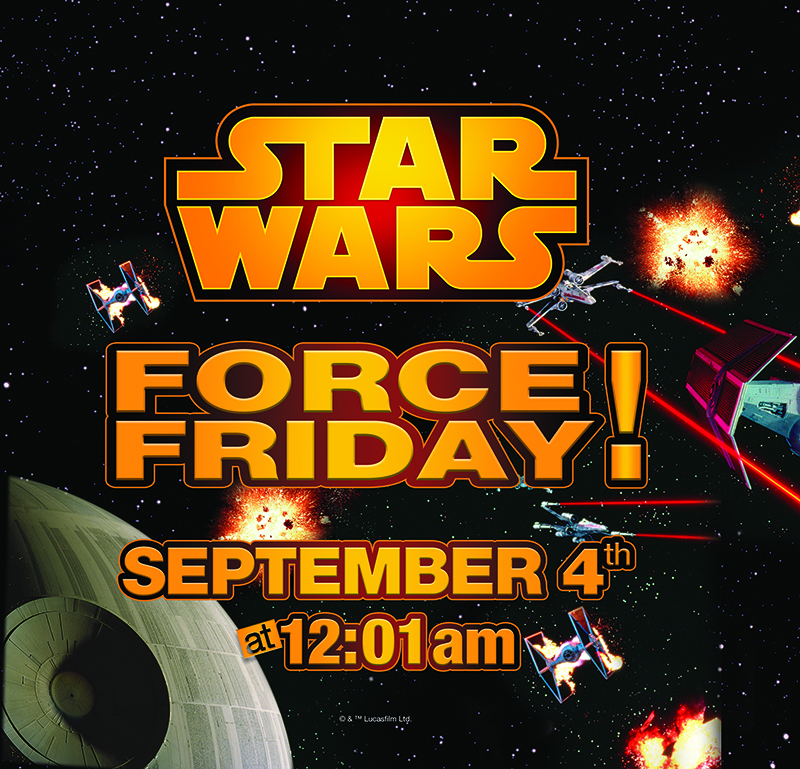 Toys-R-Us issued a press release yesterday detailing some of the events that will be included in their huge “Force Friday” toy launch on September 4th. The biggest events, including collectibles displays by Rancho Obi-Wan and day-long activities, will take place at Toys-R-US Times Square in New York City.  Other stores will have poster and Lego brick giveaways.  The full press release is below.

The Next Chapter of the Legendary Franchise Begins at Toys“R”Us Stores Across the Globe on Force Friday, September 4 at 12:01am as Fans Get First Access to New Toys, Exclusive Giveaways and More; Company’s International Flagship Store in Times Square to Host Historic Star Wars Toy Exhibition and Ultimate Midnight Opening Celebration

WAYNE, NJ (August 4, 2015) – Toys“R”Us® is going into hyperdrive and preparing an out-of-this-galaxy, global celebration for the upcoming debut of toys based on the next chapter of the Star Wars™ Saga at 12:01am on Force Friday, September 4. Counting down to the highly anticipated toy launch and this fall’s new theatrical release, Toys“R”Us stores worldwide and Toysrus.com have transformed into Destination: Star Wars, every fan’s retail source for The Force with hundreds of new products, including those only available at Toys“R”Us. On Force Friday, Toys“R”Us stores around the globe will open their doors for special midnight opening festivities, providing customers of all ages the opportunity to be among the first to purchase must-have merchandise, receive exclusive giveaways and immerse themselves in all things Star Wars. The company’s international flagship store, Toys“R”Us Times Square in New York City, will host a historic Star Wars toy exhibition leading up to the grandest midnight opening celebration of all, welcoming legions of eager fans with costumed characters, signing events, giveaways and more all day on Thursday, September 3.

“Since the introduction of the first Star Wars toy in 1977, Toys“R”Us has served as the ultimate destination for Star Wars playthings, providing millions of kids and collectors worldwide with their most beloved memorabilia,” said Richard Barry, Executive Vice President, Global Chief Merchandising Officer, Toys“R”Us, Inc. “Since then, Star Wars has become a time-honored franchise with loyal fan interest, making it a perennial, top-selling licensed property. With the upcoming introduction of the new Star Wars toy line, we’re excited to welcome the next generation of fans into our stores around the world with exclusive products, special events, feature shops and giveaways.”

With operations in 38 countries, Toys“R”Us is leveraging its global footprint and position as the toy authority to provide an unprecedented Star Wars experience worldwide. On Force Friday, September 4, Toys“R”Us locations in Australia, Canada, China, France, Germany, Japan, Poland, Portugal, Spain and the U.K, will open at 12:01am to welcome eager shoppers. The first customers to line up for the big product debut will receive Star Wars giveaways, including an exclusive poster, as well as the chance to be among the first to purchase exclusive Star Wars merchandise in dedicated front-of-store feature shops.

Leading up to Force Friday, stores in each of these countries will count down the minutes to 12:01am on September 4 with digital clocks, as well as Star Wars-themed microsites on each of their respective e-commerce pages. Social media users can follow the company’s worldwide midnight openings on each country’s social media channels, as well as via the Toys“R”Us U.S. Twitter channel, @Toysrus.

Midnight Openings Descend on Destination: Star Wars in the U.S.

When the clock strikes 12:01am on September 4, all Toys“R”Us stores in the U.S. will open their doors, giving customers the opportunity to be among the first to purchase hundreds of new Star Wars playthings, including a wide variety of merchandise they can’t find anywhere else.*As an added bonus, little Jedi Knights and their families attending midnight opening events will have the chance to receive special giveaways, including a limited edition LEGO® Star Wars Commemorative Brick and an exclusive Star Wars poster, while supplies last.** Also at midnight on Force Friday, shoppers will be able to browse and purchase the new products online at Toysrus.com/StarWars.

Those eager to count down to the highly anticipated toy debut can now find digital clocks at all Toys“R”Us locations nationwide and online at Toysrus.com/DestinationStarWars. Beginning on Force Friday, dedicated Star Wars feature shops will be found at the front of all stores nationwide, featuring a combination of figures, construction sets, accessories and more, plus updated countdown clocks reset to tick off the minutes to the release of the new movie.

For the latest Destination: Star Wars news and updates, fanatics can follow @ToysRUs on Instagram and Twitter, as well as Facebook.com/Toysrus. Followers are encouraged to post photos of their Star Wars toy empire, themselves dressed in their best Star Wars cosplay and their midnight opening experience, as well as engage with one another and Toys“R”Us using #DestinationStarWars.

The Force is Strong at Toys“R”Us Times Square

The biggest midnight opening celebration will take place at the company’s international flagship store in New York City, Toys“R”Us Times Square, where fans of all ages are encouraged to come dressed as their favorite Star Wars character and take part in dozens of one-of-a-kind activities designed especially for Star Wars aficionados.***

The World’s Greatest Toy Store™ is kicking the party off early with a special exhibition featuring prototypes, originals and early editions of some of the best-known Star Wars toys in the world, curated by Rancho Obi-Wan, Inc., a non-profit museum that houses the Guinness World Record-certified largest collection of Star Wars memorabilia. Presented prominently throughout the store, “Destination: Star Wars – The Experience,” will be on display from Wednesday, August 26 through Monday, September 7 and will feature dozens of notable collectibles based on all six feature films from the Star Wars Saga, including the original first four mail-away action figures from 1978, a large-sized Chewbacca figure in never publicly-released The Empire Strikes Back packaging from Kenner Products and a rare 2003 LEGO Star Wars Cloud City building set.****

The adventure kicks into high gear on Thursday, September 3, when the store hosts Star Wars activities throughout the day, beginning at 9am****, including:

*Toys“R”Us stores in the U.S. will open at 12:01am local time on Friday, September 4, except for stores in Paramus, NJ, which have varying store open times due to local ordinances. Toys“R”Us Express and Outlet locations generally follow the hours of their respective shopping centers. All store hours can be found online atwww.Toysrus.com/StoreLocator.

Toys“R”Us, Inc. is the world’s leading dedicated toy and baby products retailer, offering a differentiated shopping experience through its family of brands. Merchandise is sold in 864 Toys“R”Us and Babies“R”Us stores in the United States, Puerto Rico and Guam, and in more than 730 international stores and over 240 licensed stores in 37 countries and jurisdictions. In addition, it exclusively operates the legendary FAO Schwarz brand and sells extraordinary toys atFAO.com. With its strong portfolio of e-commerce sites including Toysrus.com, Babiesrus.com and FAO.com, it provides shoppers with a broad online selection of distinctive toy and baby products. Headquartered in Wayne, NJ, Toys“R”Us, Inc. employs approximately 66,000 associates annually worldwide. The company is committed to serving its communities as a caring and reputable neighbor through programs dedicated to keeping kids safe and helping them in times of need. Additional information about Toys“R”Us, Inc. can be found on Toysrusinc.com. Follow Toys“R”Us, Babies“R”Us and FAO Schwarz on Facebook at Facebook.com/Toysrus, Facebook.com/Babiesrus andFacebook.com/FAO and on Twitter at Twitter.com/Toysrus, Twitter.com/Babiesrus and Twitter.com/FAOSchwarz.