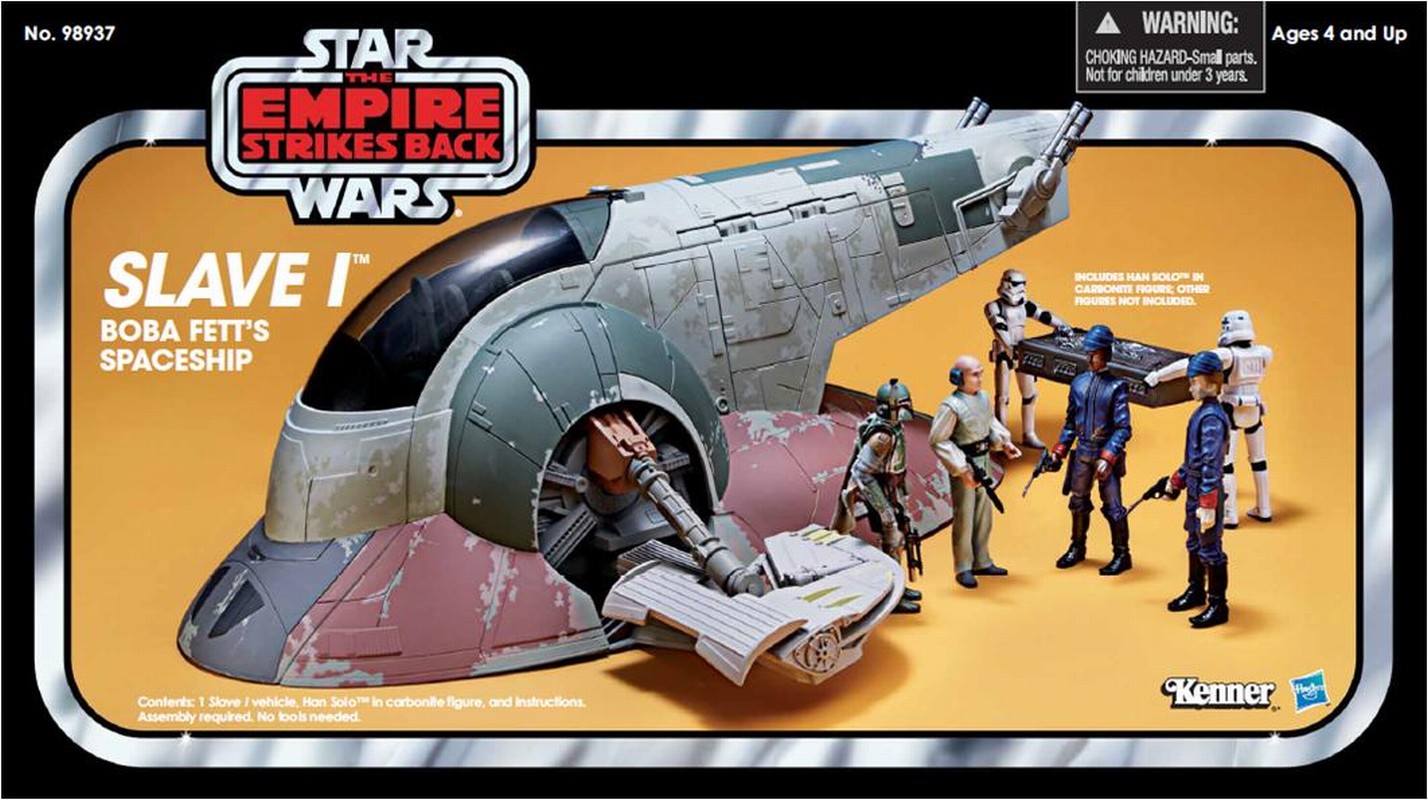 Some of the biggest news out of yesterday’s presentation may be the upcoming store exclusives.  Hasbro is releasing four large vehicles to Toys-R-Us and, in a first, Amazon, all in Vintage Collection packaging.  Target and KMart get in on the game with figure packs and, as we mentioned earlier, SDCC will have a Black Series Boba Fett and Han Solo in Carbonite.

No photos of the KMart or SDCC sets were posted so we’ll cover them at a later date.  Hasbro didn’t release pricing for the vehicles but did mention that the Slave I was planned for under $100.  Based on their track records, we’d expect Amazon to be close to Hasbro’s MSRP while Toys-R-Us will probably add a premium to their two exclusives.

Toys-R-Us will have Biggs Darklighters X-Wing Fighter which will be based on the upgraded mold most recently used in their Trench Run exclusive.  The vintage Kenner X-Wing actually has the markings for Biggs so the recreation of the box art comes with built-in synergy.

Also on tap for later in the year will be one of our favorites, the Republic Gunship.  While the other vehicles will be on their own, the Gunship is scheduled to come with Yoda, a Clone Trooper and Clone Pilot, along with the gun pods on the side.  Previously only available individually in a Battle Pack, the gun pods add a lot to the playability of this set.  The photo seems to show the new 5 points of articulation figures but we’ll be looking for more news on the specifics later.

Teased at the end of the Celebration VI presentation, the Slave I will make an appearance this year, now sporting The Empire Strikes Back color scheme.  A Han Solo in Carbonite will be included and, as mentioned, the set will come in a Vintage Collection box.

The TIE Interceptor rounds out the Amazon exclusives and will make a good companion piece to the X-Wing.

The final store exclusive is a four figure Evolutions pack of Anakin Skwalker, featuring a figure from each of the Prequel Trilogy movies and one from the Original Trilogy, as Darth Vader, in the full armored outfit.

We’ve updated to correct some misinformation we posted earlier.  The Evolutions set of Anakin Skywalker, above, will be an Online exclusive.  This second set, Birth of Darth Vader, will be a Target exclusive and will have Darth Vader, Palpatine, Shocktrooper and Chopper Droid.