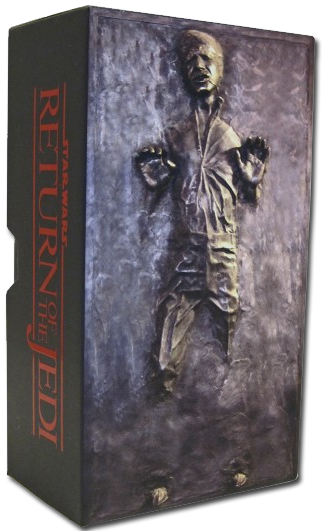 Topps has released their Return of the Jedi 3D Widevision card set for order.  The set is limited to an edition of 2,000 sets and comes in a box that resembles Han Solo frozen in Carbonite.  Each box will contain 2 “hits” with the first being a sketch card and the second either a patch card or a Sketch Card Relic.

One in every four boxes will have a 3rd hit which will be an autograph card.  There are 10 different autographs including Mark Hamill, Carrie Fisher and Jeremy Bulloch.

The set is only available from Topps in their online store and it’s priced at $99.99.  These were first made available late afternoon on July 23rd but as of this writing, less than 24 hours later, there are less than 300 sets available.