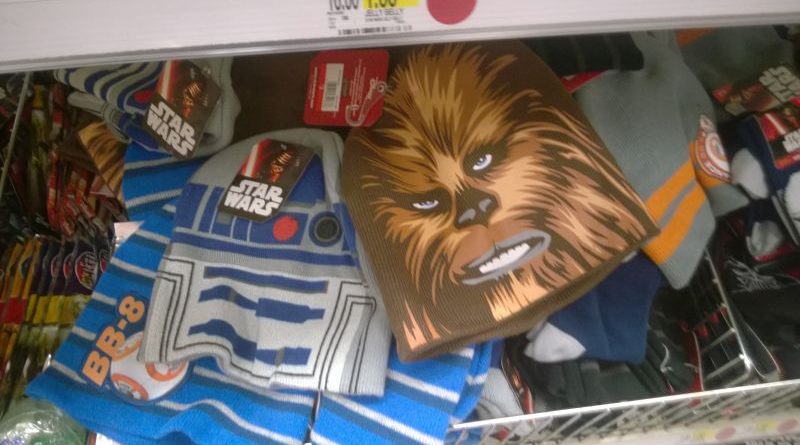 Target stocked new Star Wars items in the dollar spot at the front their store. The items range in price from $1 – $7 with most being on the lower end of the scale.  What we found may vary from your local stores so make sure to check through the whole section if you’re looking for anything.  There were also a couple empty slots and we didn’t look at the tags to see what was missing.

The $1 items include a selection of notebooks with different themes including Kylo Ren and BB-8.  Three or more assortments of pencils including a set that looks like lightsabers while the others have logos and graphics. They have individually carded character erasers that look to be the same or similar to those that were in the blind-bagged The Force Awakens assortment that was available earlier in the year.  There was a pack of stickers and some of the Fun Packs with stickers, coloring books, and small things for party prizes and that sort of thing.

An assortment of can coolers features “May the Force Be With You” text, Rebel logo, and Yoda’s key phrase, “do or do not, there is no try.”

Also for $1, a selection of socks featuring characters such as BB-8, First Order Stormtrooper, and others. If you’re hungry, you can pick up some Star Wars themed Jelly Belly jelly beans.

At the next price level, there were some knit hats featuring characters such as R2-D2 and Chewbacca, BB-8, and X-Wing Squadron.

For five dollars, Target has two sets of 2-pack glasses by Zak! who also makes the AT-AT Driver mug we found back in early December. One set of glasses features Darth Vader and Stormtroopers while the other pack has R2-D2 and C-3PO.

There’s also an assortment of iPhone hard cases. We looked through and found cases with BB-8, Kylo Ren, Darth Vader, First Order Stormtrooper, and more. We weren’t ambitious enough to go through the entire stack so there may be more designs available.

We think the only items at the $7 price were two school sets which contain erasers, stamps and other items. They each come in a case, black for Darth Vader and orange for BB-8, with the contents themed accordingly.