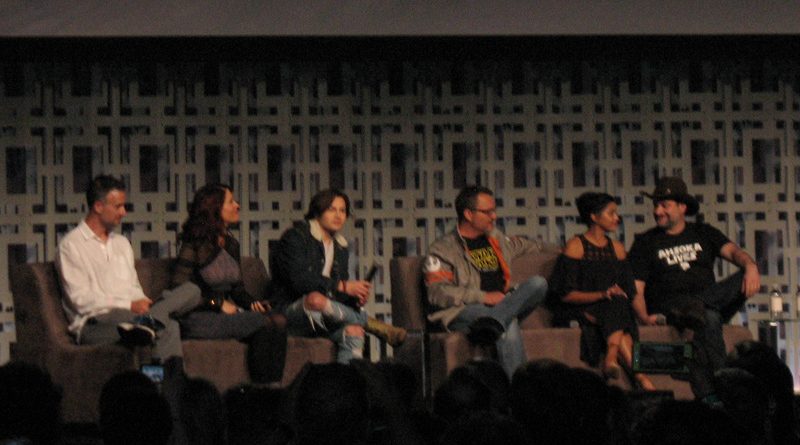 During Star Wars Celebration we had a chance to attend the Star Wars Rebels panel on Saturday morning. The reception wasn’t great in the theater so we originally took notes and then dumped them all to Twitter immediately after the panel was over.

Since not everyone is on Twitter, we thought we’d recap the panel from our notes so that we can look back on them.

The panel was hosted by David W. Collins and featured Dave Filoni and the entire Rebels crew; Freddie Prinze Jr., Vanessa Marshall, Taylor Gray, Tiya Sircar, and Steve Blum. As you read through below you’ll also see that Warwick Davis joined the discussion when it was revealed that he’ll be voicing the character of Rukh (we initially tweeted “Rook” as the character’s name and have corrected it for this article), Admiral Thrawn’s bodyguard from the original Timothy Zahn book trilogy “Heir to the Empire.”

We were treated to a Season 4 trailer which has since been posted online for everyone (below). It was also announced that Season 4 will be the final season for the show. Dave Filoni, in making the announcement, made the point that he wanted to write an ending to the story and alluded to The Clone Wars in mentioning that he hadn’t been able to do that previously and knew how it felt to be left with unresolved stories. It was reported after the panel that season 4 would also be a shorter season, with 15 episodes.

At the end of the panel, the full cast joined the audience in viewing a full season 4 episode, featuring Mandalore. We won’t give away any details of the episode and only say that it was a fun and action-packed episode.

Take a look at the season 4 trailer and then check out the original Twitter thread we posted at the end of the panel. We’ve corrected some spelling mistakes and made complete sentences out of others.

Really poor reception in the stage. Notes dump on the way for #Rebels #SWCO panel.

Filoni talks about wanting to finish Maul’s story. We knew, but Dave Filoni confirms we see Luke in Twin Suns.

Admiral Thrawn was in discussion early on but needed right moment. He studies art, Sabine is an artist. Brought Zahn in on character talk.

Lots of Joking about Hot Kallus and how it took off.

Filoni joking about Chopper and how he’s now a movie star and hard to work with. Chopper in season 4 will have a bigger heart.

Mon Mothma in S4, may see her get a bit fiery.  Forest Whitaker coming back. Getting closer to how he appears in Rogue One. U-Wing in Rebels.

Sad announcement, Season 4 will be final season of Rebels. Not the end of animation shows. Filoni thanks cast for their hard work.

Dave went off stage and changes his shirt to “Ahsoka Lives!” Everyone goes nuts!

Finally we see an awesome trailer for season 4. Visuals are impressive & some familiar Rogue One/ANH locations…

At the end of the panel, we got to see an episode from season 4, takes place on Mandalore. It’s really good.

And that’s it for the #Rebels #SWCO panel notes dump.