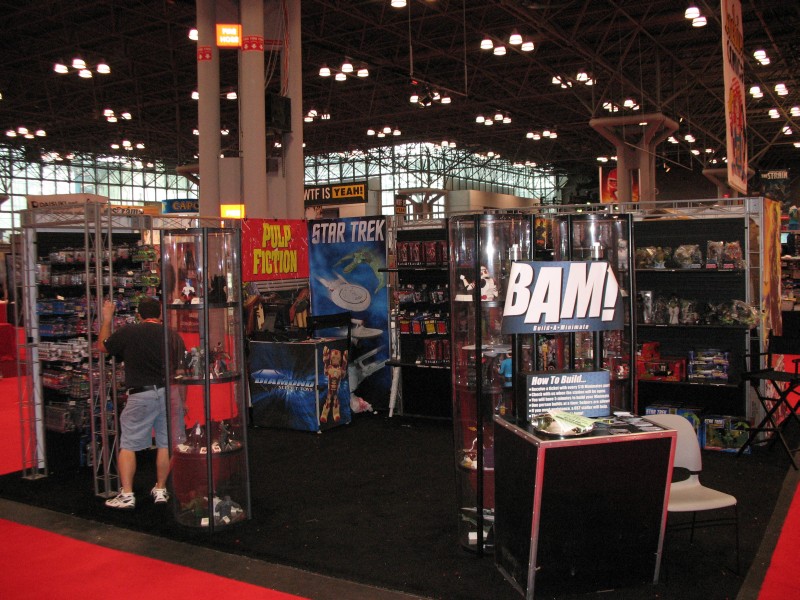 Diamond Select Toys held two panels at New York Comic Con and had several new items on display at their booth this past weekend.  We didn’t attend the panel on Saturday that covered all of their lines besides Minimates, but did attend Sunday’s panel,  Marvel Minimates: A Toy Line Turns 10, hosted by Zach Oat, which was basically all Minimates.

There was no photography allowed during the Minimates panel, but they did reveal some fun information that we’ll try to pass on.  The following are all releases that were announced previously but are getting closer to release

Next up, Zach and the crew showed off new items, some of which, we believe, were debut announcements.

The Pulp Fiction and Sin City lines look to have some interesting figures.  Sin City, since it’s based on the film, will include stylized likenesses of Jessica Alba, Bruce Willis and Mickey Rourke as Marv.  We’ll be on the lookout for more information on that.

The Battle Beasts line seems to be one that the Minimates team is championing, including an animated short that was played during the presentation.  Friend of the Holocron, Steve, who attended with us, has been looking for a Bear to be added to the line and was very excited to see the design sheet for that character.  There’s no definite release for these at this time, but Zach Oat mentioned that they were looking for ways to get them out.

The second half of the panel moved to a Q&A session with the audience.  A few highlights:

There were two questions about licensing and actor likeness approval that we found interesting.  Diamond Select will go after some licenses that they like but many also come to them.  Whether it’s a company seeking them our directly because they enjoy the Minimates model or it’s a licensing company that represents multiple properties presenting more than one opportunity.

When it comes to actor likenesses, DST said that it’s not an issue since the Minimates line is a caricature and not a direct likeness.  The irony in that is some of the Minimates, take Star Trek as an example, end up being a better representation of an actor than in a traditional action figure line such as the 2009 Playmates offerings.

Some of the recent releases of Minimates have included fun, new stands that feature flame or ice or even smoke, and DST is also now offering stand packs that can be purchased separately from the figures.  They have two styles, one with clear, round stands and the other action stands.

Although Diamond Select doesn’t have the Star Wars license for Minimates, they do have several items including vinyl banks and bottle openers.  Many of the banks shown off, including R2-D2 and Yoda, are out now and were available for sale.

For upcoming releases, DST showed off two new banks, Cad Bane from The Clone Wars and Commander Thire.  Darth Vader and Boba Fett will be making appearances in December and Spring 2014, respectively, in the bottle opener line.