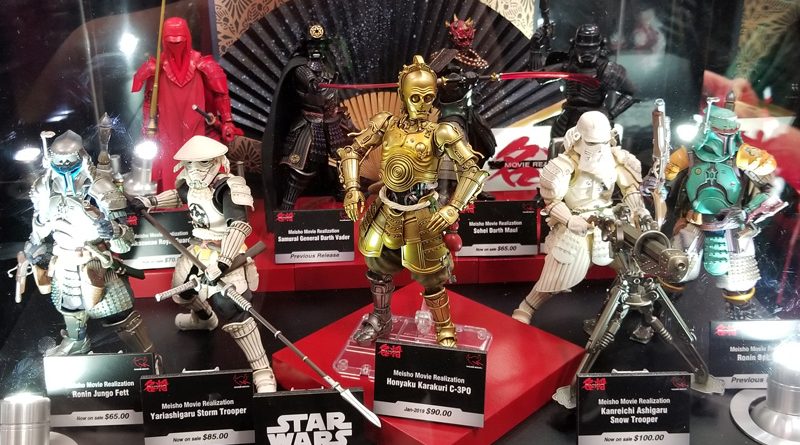 Bandai had a large booth in New York this year and while they were showing off a lot of their Gundam models and S.H. Figuarts figures, we spent most of the show drooling over their amazing models and the Meisho Movie Realization figures.

For models, Bandai was showing their line of 1:12 figures, many of which are available now with a few dropping in the next couple of months. New figures to look forward to include R4-I9, and the new Star Wars: Return of the Jedi Darth Vader with the likeness of Sebastian Shaw as Anakin Skywalker. In the ship line, Bandai had most of what’s available now, including both The Last Jedi and Solo versions of the Millennium Falcon and the very cool Death Star Attack set.

Tamashii Nations Meisho Movie Realization figures were on display and the highlight was the upcoming Honyaku Karakuri C-3PO which will be out in January. It was also impressive to see the recently released Kanreichi Ashigaru Snow Trooper with the tripod mounted gun.

Marvel is another big line for Tamashii Nations, under their S.H. Figuarts brand, and a big display highlighting the Avengers: Infinity War figures was included in the booth. New license, Harry Potter, was represented by Harry, Hermione, and Ron. All three figures should be available by the end of the year with Harry up first in October followed by Ron in November and Hermione in December.