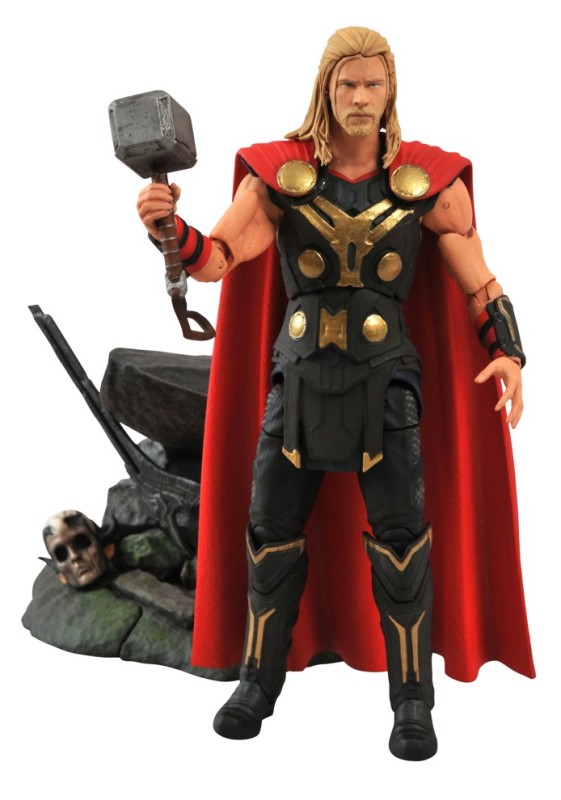 We’re a little late on this one, but last Wednesday saw the release of several new Diamond Select offerings.  Included were the new Marvel Select Thor from Thor: The Dark World, along with a Rick Grimes vinyl bank and a Ghostbusters firehouse statue.  Check out the photos and press release and make sure to stop by your local comic shop to pick them up.

Walking Dead Rick Grimes Vinyl Bust Bank
The popular line of Walking Dead banks continues with its first human character! This 8-inch vinyl sculpture of protagonist Rick Grimes is based on his appearance in the acclaimed Walking Dead comic book series, and while it looks like a bust, it’s actually a bank, with a coin slot in the back as well as an opening in the base! Factor in Rick’s collectible-quality paint and sculpting, and your zombie banks won’t stand a chance!  Sculpted by Eli Livingston! (Item #JUL131822, SRP: $23)

Marvel Select Thor The Dark World Action Figure
Thor, the Mighty Avenger, returns to the big screen this fall in Thor: The Dark World, and Diamond Select Toys has teamed up with Gentle Giant to capture his new on-screen look! Standing approximately 7 inches tall with 16 points of articulation, the new figure features the latest Thor costume, straight from the set of The Dark World, and an exacting likeness of Chris Hemsworth. The figure will come packaged with a detailed base that combines with Jane Foster’s to re-create a scene from the film. (Jane coming soon!) Comes in display-ready Select packaging, complete with side panel art. Sculpted by Gentle Giant Studios! (Item #MAY131784, SRP: $25)

Ghostbusters Light-Up Firehouse Statue
Light ’em up, boys! The light-up Ghostbusters statue line continues with the famous Ghostbusters firehouse! Lit from within like someone just shut down the containment grid, this 7-inch mini-statue is the perfect accessory for any Ghostbusters fan’s desk. Faithfully re-creating the iconic landmark, it stands atop a black base, and runs on two AAA batteries (included). Limited to only 1,984 pieces! (Item #JAN131636, SRP: $70)