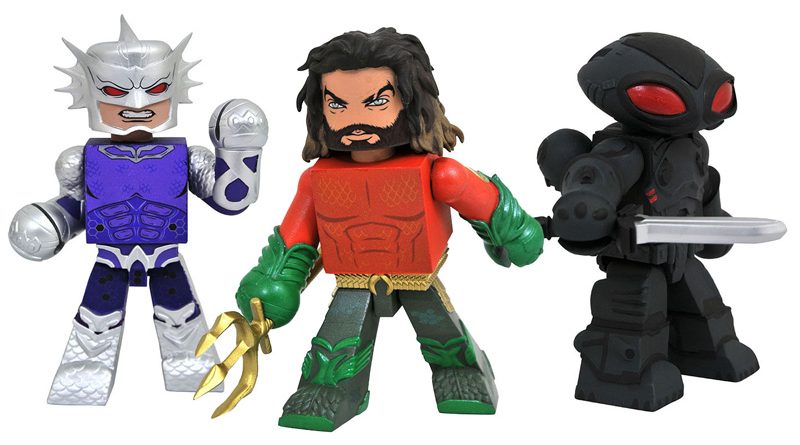 The new year is well underway, and DST has delivered a truckload of toys to your local comic shop! Vinimates based on the recent Aquaman Movie are washing ashore, and Vinimates from the upcoming Kingdom Hearts III video game are telling a Toy Story! Plus, a Gallery PVC of Shazam, just in time for the movie, and an assortment of Kingdom Hearts action figures! It’s the best of all worlds! Find a comic shop at comicshoplocator.com or order through your favorite online retailer!

A Diamond Select Toys release! The Wisdom of Solomon! The Strength of Hercules! Billy Batson’s alter ego Shazam is the next entry in the DC Gallery line of PVC Dioramas, and this approximately 11-inch sculpture captures the hero in a split-second, grabbing a bolt of lightning on its way to the ground. With a feature film in the works, Shazam is poised to ride that lightning back to stardom, and this amazing sculpture celebrates the character’s godlike power! Sculpted by Joe Menna based on a design by Shawn Knapp.  Packaged in a full-color window box.  (Item #AUG182580, SRP: $45.00)

A Diamond Select Toys release! Are you ready to play Space Paranoids? The Kingdom Hearts Select action figure line travels to the video game universe of Space Paranoids, where everyone gets a high-tech makeover! This assortment of multi-character figure sets includes Black Coat Mickey Mouse with a Heartless Assassin and a Shadow, Space Paranoids Goofy with Tron, and Space Paranoids Sora (with Photon Debugger) with Sark! Each figure features multiple points of articulation and is sculpted in a 1/10th scale, and comes packaged in display-ready Select packaging with side-panel artwork for shelf reference. Sculpted by Oluf W. Hartvigsen! (Item #JUL182491, SRP: $24.99/ea.)

Find a comic shop at comicshoplocator.com!