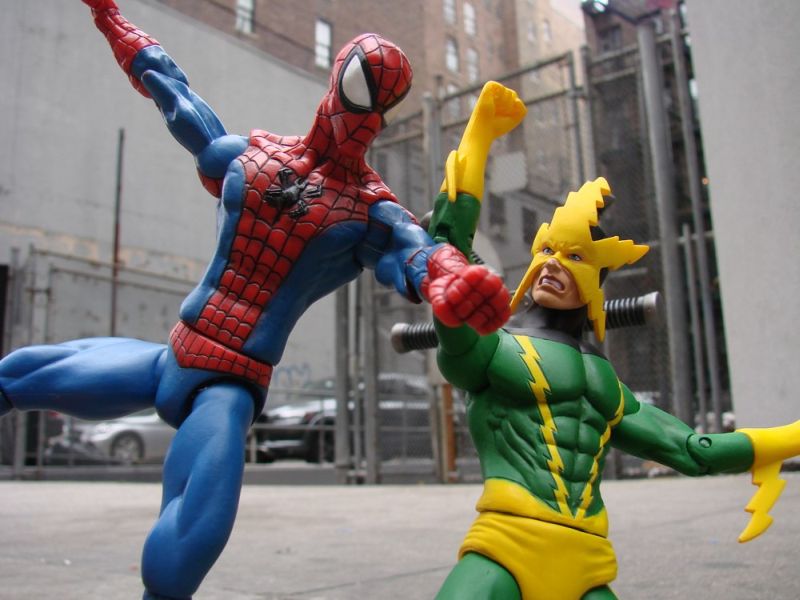 In 1964, The Amazing Spider-Man #9 hit comic book racks, pitting the newly minted superhero against the man who would become one of his most legendary foes: Electro! For 50 years, the electricity-wielding supervillain has gone up against Spider-Man, by himself and as a member of the Sinister Six. And while his costume has occasionally changed – most notably in this summer’s movie The Amazing Spider-Man 2 – the original, iconic lightning-bolt suit has repeatedly returned to the comics page. Now, Diamond Select Toys has teamed up with marvelshop.com to create an exclusive box set featuring Spidey and Electro in their classic outfits!

Starting on August 25th, marvelshop.com will be the only place to order the Marvel Select Spider-Man vs. Electro Action Figure Box Set, featuring a comic-style Spider-Man and an exclusive sculpt of Electro in his classic yellow-and-green costume! Sculpted by Sam Greenwell, who has previously created figures of the Superior Spider-Man, Storm and Silver Surfer for the Marvel Select line, Electro stands approximately 7″ inches tall with 16 points of articulation. Both will come packaged in a window box with comic-book artwork on the front.

After September 8, the Marvel Select Spider-Man vs. Electro box set will be made available on disneystore.com, and will begin to make its way to Disney Store shelves in the U.S. and Canada.