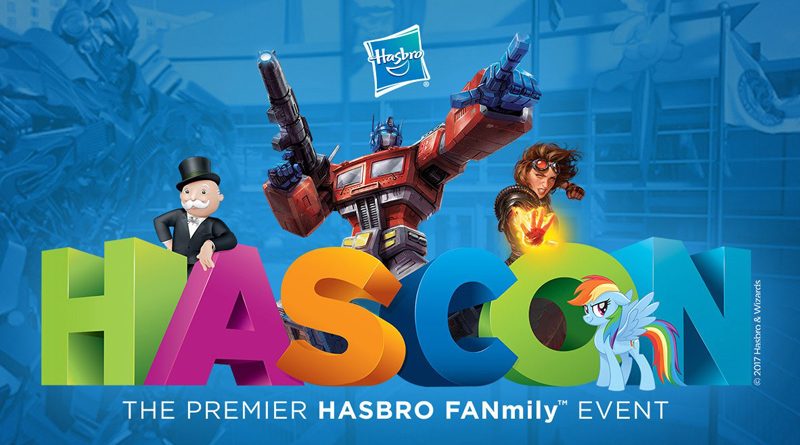 San Diego, CA (September 6, 2017) – IDW is joining longtime partner HASBRO for their debut convention in Providence, Rhode Island – HASCON! Featuring unique brand-based experiences, celebrity appearances, and premiere paneling, HASCON is set to be a fun-filled convention for the whole family. Taking over both the Rhode Island Convention Center and the Dunkin’ Donuts Center from September 8th – September 10th, fans will be treated to a convention unlike any other!

Find the IDW booth stocked with comics, graphic novels, enamel pins, lithographs, and more, all weekend long at booth L104! Those that weren’t able to secure one of the highly-sought after Tom Whalen prints at SDCC will have another chance at HASCON, as ROM, G.I. Joe, Optimus Prime, and Megatron will all be available as a gift with purchase at the IDW booth. Be sure to get yours while supplies last.

IDW will also be offering several HASCON exclusives, at $10 each, that can ONLY be found at the IDW booth, including:

IDW will also be bringing remaining 2017 convention variants for Clue, Jem and the Holograms, My Little Pony, ROM, and Transformers vs. G.I. Joe, to HASCON for their original price.

Talent from across the IDW line will be on hand to sign throughout the weekend including Marcelo Matere (Transformers), Brenda Hickey (My Little Pony), Aubrey Sitterson (G.I. Joe), Chris Ryall (ROM), Chris Mowry (Transformers), and more!

Throughout the weekend creators will be revealing behind-the-scenes secrets and tips about what it takes to bring some of the most beloved brands to life on the page in exciting and enlightening panels:

IDW Transformers Panel
Friday, September 8th | 12:30p.m. | HASCON Main Stage
Have you ever wanted to know how a comic book comes to life? Hear from the artists and writers that create the Transformers comics. Learn how story ideas are developed and brought to life by the amazing team of writers and artists at IDW.

From Unicron to Megatron – Explore the Villains of Transformers
Friday, September 8th | 2:30p.m. | HASCON Main Stage
It feels good to be bad. Dive into the history of some of the most evil bots in the Transformers universe. Hosted by the Transformers brand team.

G.I. Joe Legends Dinner
Friday, September 8th | 6:30p.m. | Providence Renaissance Hotel
Join co-emcees and G.I. Joe authors Derryl DePriest and Dan Klingensmith for an intimate and entertaining evening event featuring one of the greatest gatherings of G.I. Joe Legends ever assembled! As we celebrate the 35th Anniversary of the launch of the G.I. Joe: A Real American Hero line, enjoy a sit-down dinner, meet and mingle with Legends and listen to them discuss their experiences on G.I. Joe. All attendees will receive an event-exclusive G.I. Joe: A Real American Hero Lithograph Set featuring paintings from the 1980’s line.

My Little Pony Mane Event Dinner
Friday, September 8th | 6:30p.m. | Omni Hotel
Enter the world of Equestria for an unforgettable evening of entertainment! Join us for special guest appearances, a sit-down dinner and a first look at select 2018 My Little Pony toys. Head Storyteller, Meghan McCarthy will introduce a sneak preview of scenes from the upcoming My Little Pony: The Movie! Plus, enter a raffle for a chance to win My Little Pony merchandise. Each VIP attendee will receive a Super Fan My Little Pony gift bag including pre-signed autographs from multiple members of the Mane 6, Special Comic reprints for HASCON, a VIP event exclusive pin set and more.

IDW Revolution Panel
Saturday, September 9th | 11:00 a.m. | Discovery Family Stage
IDW and Hasbro have been making great comics together for over a decade now! How’d it all get started? Where’s it going next? IDW CCO Chris Ryall and guests to be named will share stories of comics past and Visions of comics future!

IDW Transformers Panel
Saturday, September 9th | 1:00p.m. | HASCON Main Stage
Have you ever wanted to know how a comic book comes to life? Hear from the artists and writers that create the Transformers comics. Learn how story ideas are developed and brought to life by the amazing team of writers and artists at IDW.

IDW MLP Panel: Comics are Magic
Sunday, September 10th | 12:00p.m. | Discovery Family Stage
IDW has been publishing My Little Pony comics since 2012, and recently passed the major milestone of Issue #50. Come meet some of the creative team behind these beloved comics, and learn first-hand what goes into creating original stories about your favorite Pony friends. Bobby Curnow, My Little Pony series editor at IDW, and lead artist Andy Price, have been working on the comics since the very first issue. And Brenda Hickey, who is currently drawing the new My Little Pony: Legends of Magic series, joined the team not long after in 2013. Join us for behind the scenes stories of how My Little Pony comics come to life!

Tickets and information for the convention are available at: https://hascon.hasbro.com/

IDW Games’ diverse line-up includes the international phenomenon Machi Koro, as well as hit licensed games such as X-Files, Back to the Future, The Godfather, and TMNT.

IDW Entertainment serves as the worldwide distributor of Wynonna Earp airing on the Syfy Channel in the U.S. and is producing BBC America’s Dirk Gently, based on the bestseller by Douglas Adams starring Elijah Wood and Samuel Barnett.