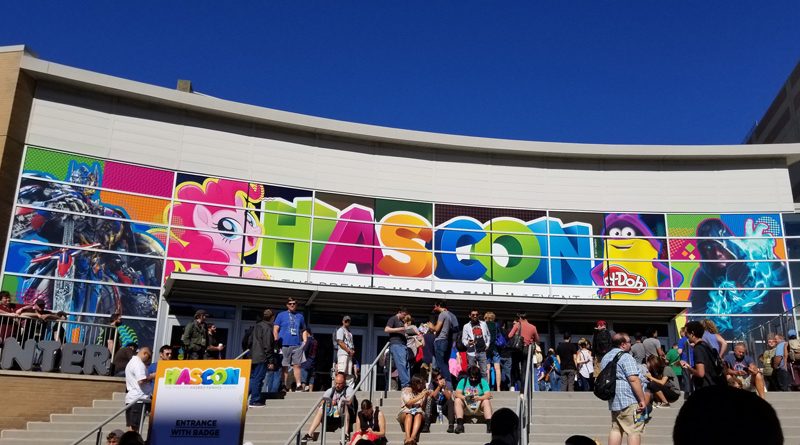 When HASCON was announced I thought it would be interesting to see what the show would be like but as it got closer, I had decided not to go. However, I applied for media credentials and was approved, at which point I decided to go. And I’m glad I did.

HASCON isn’t like your standard comic convention nor is it like Star Wars Celebration. The show was dedicated to one company, Hasbro, and all of their various lines of toy products from games to NERF to action figures. Licensed lines, such as Disney, Marvel and Star Wars, and Hasbro IP like NERF and Transformers were represented with demonstrations available for everything. You could play life-sized versions of Pie Face, have your face painted in the My Little Pony area, shoot nearly every type of NERF gun in production, transform robots, and hear the new Force Link vehicles and action figures.

Hasbro employees were everywhere, all available and approachable to answer questions about the products on display or help you find a panel. And while seeing all of Hasbro’s product lines in one place was fun, the best part of the show may have been the panels. Star Wars, Marvel, G.I. Joe, and Transformers were all represented with some focusing on new and upcoming product or, in the case of G.I. Joe, taking a look back at a classic line of toys and how they were produced. If you were interested in panels not directly related to toys, you were also covered. James Gunn spoke about Guardians of the Galaxy, Mark Wahlberg and Isabela Moner were there for Transformers, and Stan Lee came to talk about all the iconic superheroes he had a hand in creating. David “Big Papi” Ortiz, Jackie Bradley Jr., and Brandin Cooks showed up to sign autographs and Daya and Flo Rida gave free concerts on Friday and Saturday respectively.

While most of the panels were free, as were the autographs, there were VIP events for fans of G.I. Joe, Transformers, and Stan Lee. The added value of those events allowed fans to interact in an even more intimate climate. Whether you attended the VIP events or the free panels, the access provided at HASCON was invaluable. Attending those types of events at New York or San Diego, or even Celebration, would require hours in line at least if not additional tickets.

A huge draw for a lot of people I ran into during HASCON were the Magic: The Gathering and Dungeons & Dragons events. Not only was there space on the main convention floor for games of Magic, the fifth floor ballroom had dozens of tables set up for Magic and D&D gaming that ran throughout the weekend.

As I said, if I hadn’t been approved for media credentials I may not have gone. Adult single day tickets were $60 and 3-day were $165, which are quite expensive to attend what could be considered a big commercial for Hasbro’s products. There were HASCON exclusives as well as Summer Convention exclusives (most launched at San Diego Comic-Con) available and a Hasbro Boutique sold general release merchandise (at a reduced cost, Black Series Star Wars figures were $15.99). A small dealer floor was on the fifth floor of the convention center but there were only a handful of booths and it wasn’t the same type of shopping experience you’ll see at other cons.

HASCON also had a few growing pains. On Friday the first entrants to the show mainly headed to the store to buy show exclusives while the rest of the floor, and the Hasbro Boutique, were quite empty for a while. I waited in line for over an hour and the line was still an hour or longer behind me. The Hasbro employees seemed to handle it, but there also seemed to be some surprise that the line grew as much as it did. As SDCC veterans it seems they could have anticipated it better. The other bottleneck was on Saturday when autograph tickets were being handed out for James Gunn and Peter Cullen and Frank Welker. Tickets were free and were handed out starting an hour prior to the session at the Help Desk in the main entrance. Before Gunn’s 1:00 panel people were already in line for the 3:00 ticket distribution which then created a mess and a lot of miscommunication at 3:00 when people were supposed to be lining up. By Sunday they had cordoned off a section by the front window to corral the line for autograph tickets.

Even with a couple of minor inconveniences, as far as I’m concerned, HASCON was a success. It was fun to see all of Hasbro’s products out and in use by fans, especially kids. Access to the Hasbro employees for questions on the various toys was unparalleled, and I want to extend a special thanks to Steve Evans and Joe Ninivaggi for answering our questions for the Q&A video. If HASCON becomes a regular convention, I would definitely consider attending again.