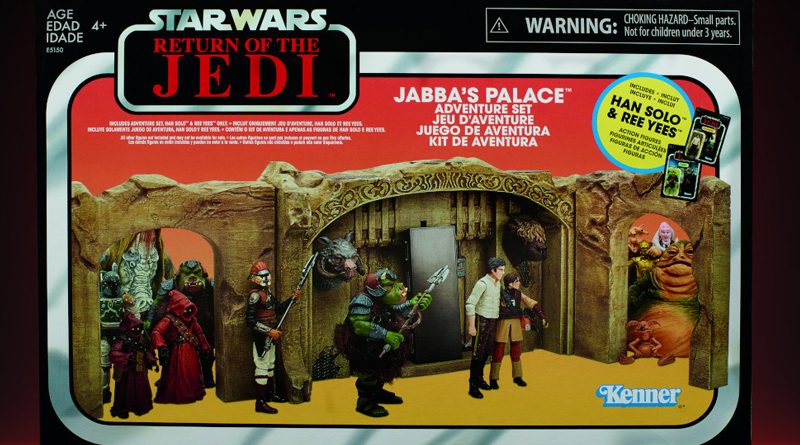 Hasbro held their annual Toy Fair event this afternoon and while there weren’t any new figure reveals for the Black Series, there were a couple of surprises. The big reveals were the new Retro Collection and and a few new The Vintage Collection figures and playsets.

The main reveals, besides packaged versions of Luke Skywalker in Stormtrooper disguise and the Jump Trooper, were of Darth Maul and Obi-Wan Kenobi who will be available first at Celebration Chicago on 20th Anniversary Star Wars: The Phantom Menace cards. Darth Maul was previously released early in the Black Series collection while Obi-Wan will be available soon in the main line. These releases are similar to the 40th Anniversary Luke Skywalker X-Wing release from 2017’s Celebration Orlando.

Lando Calrissian is a Walmart exclusive and will retail for $12.99. Jabba’s Palace Adventure Playset will retail for $49.99 and is also a Walmart exclusive. Jabba’s playset will include The Vintage Collection carded versions of Ree Yees and Han Solo, both repacks, and a Han Solo in Carbonite accessory. The walls making up the Palace are movable so the set can be displayed in a couple of different configurations. Both releases are scheduled for Spring.

The new Tatooine Skiff features removable panels, extending plank, and a display stand that will allow the Skiff to be displayed in multiple ways, including tilted allowing your Han and Lando figures to hang from the included cables. The Skiff retails for $49.99 and will be available in the Fall at select retailers.

Finally we have the Skiff Guard 3-pack. The set includes Brock Starsher, Vizam, and Vedain. Starsher was previously released as Sgt. Doallyn. Vizam is also a repack leaving Vedain as the only new figure in the set. It will retail for $39.99 and will also be available in the Fall at select retailers.

The Retro Collection of figures will be a Target exclusive available this Spring. The basic figures will retail for $9.99 and includes Luke Skywalker, Princess Leia, Han Solo, Chewbacca, Darth Vader, and Stormtrooper. The retro cards will have printed distressing and a red “Retro Collection” announcement on the front of the card. All of the figures will be copyright dated 2019 but from the Q&A sessions it sounds as if the weapons and accessories will be very close to those released with the Kenner figures in the 70s and 80s.

Besides the single carded figures, we also have a Grand Moff Tarkin figure, which will be carded, and packed in with Escape From Death Star Game.

Hasbro is launching a new 8-inch scaled line called The Black Series Hypereal. The first figure will be Darth Vader and will feature soft goods outfit and cape, interchangeable hands, lightsaber, and display stand. The figure has a metal skeletal frame which will allow for plenty of articulation with no visible exterior joints. Per Star Wars Action News, Hasbro believes the material used in the jumpsuit will hold up and not deteriorate as has been seen in other company’s seamless bodies. Darth Vader is $79.99 and will be available from select retailers this Fall. 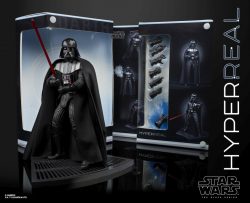 Jabba’s Sail Barge, the first Haslab release, was on display at Toy Fair and Hasbro had a couple of updates. The Yak Face figure, on a Power of the Force card, will include an accessory that the regular release doesn’t, a drink glass. The Sail Barge is scheduled to ship to customers around March 4th, updated from February 28th.

Finally, EU fans will have a shot at the Barge in the near future. Hasbro is partnering with eBay to handle the sale and links will be posted to the Hasbro Pulse website when they’re available. During a question and answer session at Toy Fair it was said that the total edition size will still be under 10,000 pieces.